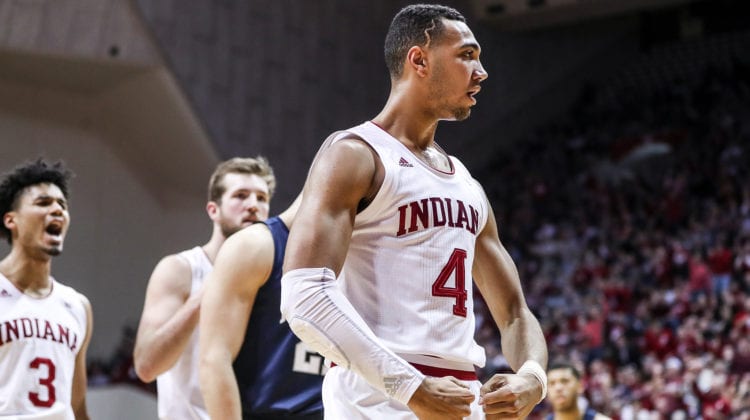 Check out below for the first installment of “Weekend Brunch”, a new project that will be published each and every Friday on all the latest happenings in the world of college basketball.

Indiana’s talented big man is the only player among the Big Ten’s Top-15 scorers from last season that didn’t either declare for the NBA Draft or enter the transfer portal.

His decision to return to school is also the primary reason why the Hoosiers have a chance to finish in the upper tier of the Big Ten next year in what will be Mike Woodson’s first season as coach of his alma mater.

“He’s a big center that can run and jump,” Woodson recently said of the 6-9 Jackson-Davis, who averaged 19.1 points and nine rebounds last season as a sophomore. “He’s very athletic and has a strong left hand.”

A menace in the paint, Jackson-Davis has shot an average of 54.2 percent from the field during his first two years in Bloomington, but has yet to attempt a single three-point shot in his career. Don’t be surprised if that changes under Woodson.

“He needs to develop a little jump shot,” Woodson said of Jackson-Davis. “In watching him since I’ve been here, he’s got good form. I’ve got to give him the confidence and put him in the right positions where he feels comfortable shooting the ball. That’s going to be important in terms of his development and eventually playing in the NBA.”

Barring something unforeseen, Jackson-Davis should be a preseason All-American and the favorite to be named Big Ten Preseason Player of the Year along with Michigan’s Hunter Dickinson.

He should also have a better supporting cast as a junior.

Woodson added two potential starters in a pair of transfers — Pitt’s Xavier Johnson (14.2 points, 5.7 assists, 3.4 rebounds) and Northwestern’s Miller Kopp (11.3 points) — as well as another potential starter in 6-4 freshman Tamar Bates. A consensus four-star recruit by 247 Sports, Bates was originally committed to Texas before Shaka Smart took the head coaching job at Marquette. All three players should help Indiana have better spacing on offense, which is important for a program that’s shot an average of 32.5 percent from three-point range in the last two seasons.

Indiana is a combined 32-27 over the past two seasons with Jackson-Davis in the lineup, with a 16-23 record in Big Ten regular season games.

The Hoosiers have not played in the NCAA Tournament since 2016 and are currently ranked 30th in the ROTHSTEIN 45.