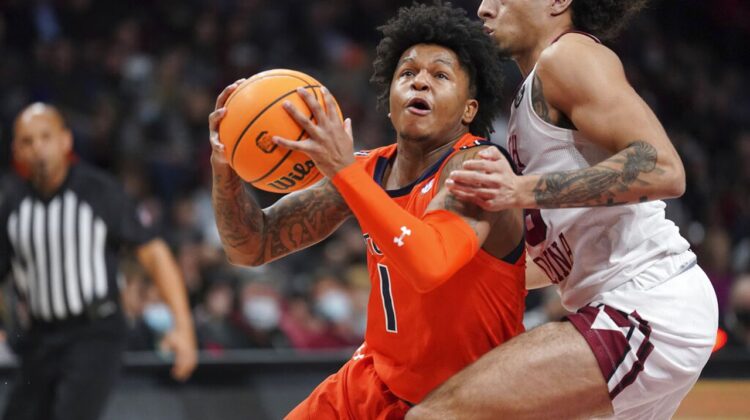 Wendell Green will step up a weight class against Alabama
Green hasn’t just been good over the past month — he’s played like an All-SEC first-team caliber guard. In Auburn’s last seven games, the 5-11 Green — who transferred from Eastern Kentucky — has averaged 15.6 points, 4.9 assists, and 4.7 rebounds. He’ll step up a weight class tonight in Tuscaloosa. Alabama (11-4) has been incredibly mercurial this season, but no one has ever questioned the caliber of its perimeter. Green — and the rest of the Tigers’ roster — will have their hands full tonight against the Crimson Tide’s guard-heavy attack of Jahvon Quinerly, Jaden Shackelford, Keon Ellis, and JD Davison — a quartet who averages a combined 52.3 points, 20.4 rebounds, and 12 assists. Auburn (14-1) is on an 11-game winning streak and hasn’t lost since Nov. 24th.

Texas Tech/Baylor
If the Red Raiders are good enough to beat Kansas like they did on Saturday without both Kevin McCullar and Terrence Shannon Jr., then they’re good enough to push the defending national champions tonight in Waco. Baylor enters tonight’s tilt with 69 wins in its last 75 games. The Bears’ perimeter troika of James Akinjo, LJ Cryer, Adam Flagler, and Matthew Mayer is trending towards being in the discussion as the best guard unit in the sport. Texas Tech’s defense again has to be its anchor as Baylor is averaging 79 points in its first three Big 12 games.

USC plays a matinee
If you read this column regularly then you how emphatically I feel regarding college basketball’s need for more standalone games. Today, we’ve got one. USC (13-0) visits Stanford this afternoon (5 PM ET, 2 PM PT) in the first of three games that the Trojans will play this week; Andy Enfield’s squad will also host Oregon State and Oregon on Thursday and Saturday in Los Angeles. This rendition of USC doesn’t have a bonafide lottery pick on its roster like it has the past two seasons with Evan Mobley and Onyeka Okongwu, but it’s still very good — especially defensively. Through 13 games, the Trojans are holding their opponents to an average of just 56 points.