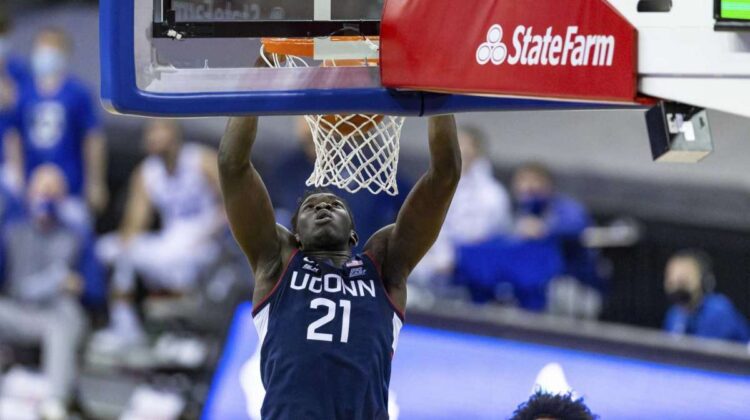 UConn may have the highest ceiling in the Big East
That doesn’t mean that the Huskies are the best team in the Big East or even the team that you or I would pick to win this conference. Until UConn — or any other team in this league — can unseat Villanova, the Wildcats are always going to be this conference’s incumbent at the top. But the Huskies’ ceiling may be higher. UConn (14-4) has only lost two games this season with all-conference big man Adama Sanogo (15.9 points, 8.4 rebounds) in the lineup — a four-point defeat to Michigan State at the Battle 4 Atlantis in November and an overtime loss a few weeks ago to Seton Hall in Newark. The loss to the Pirates was the only defeat that the Huskies have suffered at full strength. With Sanogo, Isaiah Whaley, Akok Akok, Tyler Polley, and Samson Johnson, Dan Hurley possesses arguably the deepest frontcourt in the sport. The Huskies also have a pair of All-Big East players on the perimeter in R.J. Cole (15.6 points, 4.8 assists and 3.6 rebounds) and Tyrese Martin (14.1 points, 6.7 rebounds) along with two capable underclassmen in Andre Jackson and Jordan Hawkins. There aren’t many weaknesses on this roster, one that is being a bit undervalued nationally. UConn has the pieces to win a Big East regular season title and with the right draw, reach the second weekend of the NCAA Tournament.

UCLA’s weekend will be a test of mental toughness
Can the Bruins sustain the same type of effort moving forward that they showed in Tuesday night’s 75-59 win over Arizona? We’ll find out over the next few days when UCLA (14-2) hosts Cal and Stanford at Pauley Pavilion. UCLA looked like a Final Four caliber team when it held the Wildcats to a season-low 59 points all while dominating the game for the contest’s final 30 minutes. We’ll see if it continues to stay dialed in over the next few days against two teams that are currently not projected to be in the 2022 NCAA Tournament.

Purdue/Iowa
For whatever reason, the Hawkeyes are a bit of a forgotten team in the Big Ten. They won’t be if they beat Purdue tonight in Iowa City. Iowa is 14-5 this season after losing both Luka Garza and Joe Wieskamp following last year, but still doesn’t own a Quad 1 win. That will obviously change with a victory over the Boilers, who are 16-3 and clearly one of the top teams in the sport. Purdue beat Iowa by seven when the two teams met earlier this season at Mackey Arena, but All-American forward Keegan Murray (22.8 points, 8.4 rebounds) missed the game due to injury.