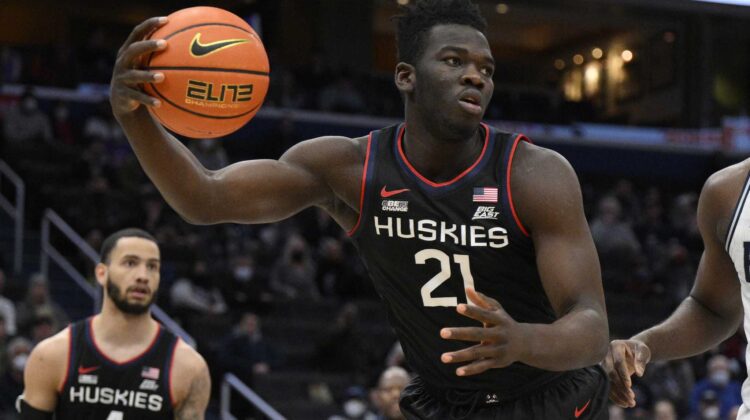 The curtain comes up for UConn
To quote Jeremy Irons in Die Hard: With A Vengeance, “this is where they say the plot thickens”. After winning their first five games by an average of 30.2 points, the Huskies will encounter their first true test of the season when they square off with Oregon tonight in the first round of the PK85 in Portland. The matchup features a mega showdown in the middle between UConn big man Adama Sanogo (21.4 points, eight rebounds) and Oregon’s N’Faly Dante (14.8 points, nine rebounds). We’ll know a lot more about the Huskies’ potential ceiling following three games this weekend in Portland.

Oumar Ballo is exploding like a volcano
This guy had himself a week. In three games at the Maui Invitational, Arizona’s broad shouldered center averaged 21 points and 10.7 rebounds while shooting 27-34 from the field. The 7-foot Ballo had a career-high 30 points and 13 rebounds in Wednesday’s title game win over Creighton. A year ago, Ballo averaged just 6.8 points and 4.4 rebounds. This is clearly one of the most improved players in the country. Arizona — again — looks like one of the sport’s best teams.

Brandon Miller’s first high profile game
Alabama’s five-star freshman has been simply ridiculous out of the gate, but he’s yet to play against an opponent of significance. That changes tonight when the Crimson Tide face Michigan State in the first round of the PK85. The 6-9, 200 pound forward enters the matchup with the Spartans averaging 20.3 points and 9.3 rebounds while shooting 50 percent from the field and 51.7 percent from three-point range. It will be interesting to how Tom Izzo — who’s already led Michigan State to wins over both Kentucky and Villanova — devises a game plan to slow down Miller. The winner/loser of this game will play the winner/loser of Oregon/UConn on Friday in the second round in the PK85.