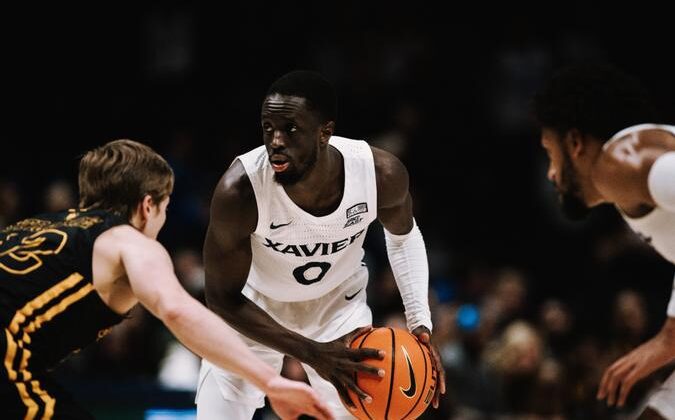 Xavier’s Souley Boum is playing like the Big East Player of the Year
He didn’t have his best game on Sunday against Marquette, but Boum did score six of the Musketeers’ final eight points and finished with 16 points, six rebounds, and five assists in a four-point victory. Xavier is now 15-3 overall and in sole possession of first place in the Big East. None of this comes close to happening without the 6-3 Boum — a grad transfer from UTEP — who is separating himself as the best player in the conference. Through 18 games, Boum is averaging 17.6 points, 4.4 rebounds, and 4.9 assists while shooting 49.5 percent from the field, 44.4 percent from three-point range, and 87.5 percent from the free throw line. There’s a lot of season left, but Boum has separated himself from guys like Providence’s Bryce Hopkins and UConn’s Adama Sanogo in the Big East Player of the Year race.

K.J. Adams is making a case to be college basketball’s most improved player
The 6-7 forward appeared in 37 games last season for Kansas, but only tallied 38 points and 30 rebounds on the entire season. He’s now a major cog in the Jayhawks’ attack and had the game-winning basket on Saturday against Iowa State. Adams’ transformation is astounding, but not surprising considering the history of player development in Kansas’ program under Bill Self. Despite only standing 6-7, Adams has had a major role for this team as its starting center. He’s now averaging 10.7 points and 4.6 rebounds while also doing plenty of things that don’t show up in the box score. Adams has reached double figures in 10 consecutive games.

Michigan State starts a big week against Purdue
After playing two straight games on the road, the Spartans are back in East Lansing to host the Boilers this afternoon at the Breslin Center. Michigan State (12-5) will also host Rutgers on Thursday night. Both games are pivotal in the Big Ten race as the Spartans trail Purdue (16-1) by just a single game. Any hope that Michigan State has to pull an upset today depends on how junior center Mady Sissoko (6.2 points, seven rebounds) performs against National Player of the Year favorite Zach Edey (21.3 points, 13.2 rebounds). This is the first of two meetings in the next two weeks between these two programs, who will also play on Jan. 29th at Mackey Arena.