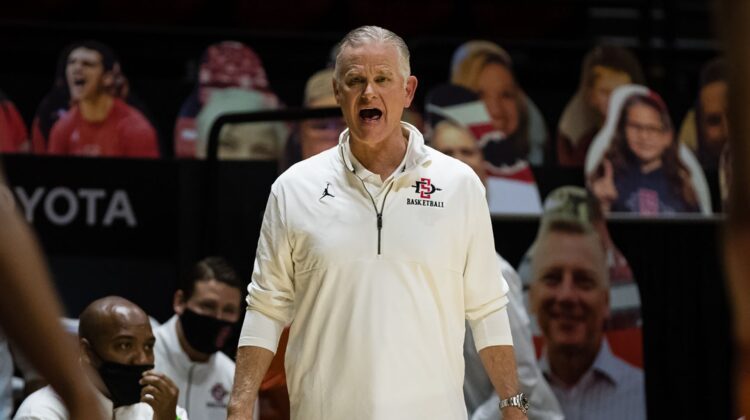 San Diego State is officially “in position to be in position”
The Aztecs’ 88-point performance in an 11-point win over Ohio State on Monday in the first round of the Maui Invitational was incredibly impressive, especially considering the offensive struggles that this program has had in the past. What does it mean moving forward? The win over the Buckeyes guarantees that San Diego State will play either Arkansas or Creighton tomorrow in the final day of the tournament regardless of what happens in today’s semifinal matchup with Arizona. For a program that plays in the Mountain West and not in a power conference, that type of opportunity is invaluable. Brian Dutcher’s squad already has wins this season over BYU, Stanford, and Ohio State. Over the next two days, it will have two more chances to move the needle. San Diego State is building a legitimate resume that should put it in prime position to earn a quality seed in the 2023 NCAA Tournament.

Anthony Black against Ryan Nembhard
Today’s game between Arkansas and Creighton in the second round of the Maui Invitational is an Elite Eight caliber tilt. One of its highlights is the point guard matchup between Black — a five-star freshman for the Razorbacks — and Nembhard, who was last season’s Big East Freshman of the Year. The 6-6 Black was sensational in Monday’s win over Louisville, finishing with 26 points and six assists while shooting an impressive 9-11 from the field. Nembhard meanwhile, has an assist-to-turnover ratio of 29:4 through five games. These are two of the best floor generals in the sport.

Joel Soriano looks like the most improved player in the Big East
And may not be close. One year after averaging just 6.4 points and 5.5 rebounds, the 6-11 center has recalibrated his game and recalibrated his body. Leaner and quicker than he was last season, Soriano is now reaping the benefits of his hard work. Through five games, Soriano has tallied four double-doubles, including a 15-point, 12-rebound performance in Monday night’s 78-72 win over Temple in the first round of the Empire Classic at the Barclays Center. He’s averaging 13.2 points and 11.2 rebounds entering tonight’s game in Brooklyn against Syracuse.