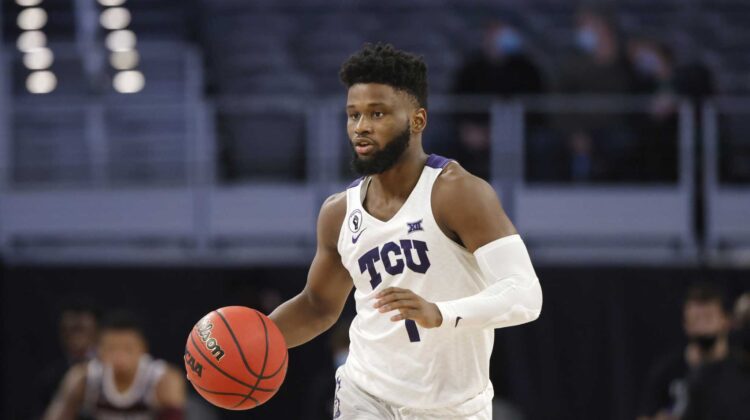 Mike Miles visits Allen Fieldhouse
In Thursday’s edition of The Breakfast Buffet, I highlighted four players — Purdue’s Zach Edey, Gonzaga’s Drew Timme, Kansas’ Jalen Wilson, and Alabama’s Brandon Miller — who had separated themselves as first-team All-Americans. Don’t be surprised if Miles makes a strong push for the fifth spot. The Big 12 Preseason Player of the Year enters today’s game against Kansas in Lawrence (1 PM ET, CBS) averaging 19.1 points, 3.3 assists, 2.9 rebounds, and 1.5 steals while shooting an impressive 53 percent from the field. He only shot 38 percent from the field last season. Miles is in prime position to use today’s game against the Big 12’s flagship program in one of the sport’s most hallowed venues to reiterate his case as one of the best players in the sport.

UCLA/Arizona
The Bruins are coming off a dramatic win on Thursday night at Arizona State, but will they have enough juice in their tank on such a short turnaround? Arizona’s overwhelming size up front with Azuolas Tubelis and Oumar Ballo is going to make it awfully hard for UCLA (17-2) to generate points at the rim or through Jaime Jaquez in the low post. Mick Cronin is going to need guys like Tyger Campbell and David Singleton to go over the top of the Wildcats’ defense if the Bruins are going to have a chance to extend their winning streak to 15 games. UCLA made just six three-point shots on Thursday against Arizona State. In Arizona’s three losses this season, its opponents have combined to make 32 shots from long distance.

A fascinating contrast in styles in Durham
In a unique battle of speed versus size, Miami (15-3) will visit Duke (13-5) today at Cameron Indoor Stadium in what is the Blue Devils’ first game since last Saturday’s loss at Clemson. Expect a chess match of epic proportions. The Hurricanes have completely leaned into playing small and regularly use Arkansas State transfer Norchad Omier — who is only 6-7 — at center. Duke meanwhile starts three players — Mark Mitchell, Kyle Filipowski, and Ryan Young — who stand between 6-8 and 7-foot. Miami is 7-8 against Duke under Jim Larranaga.