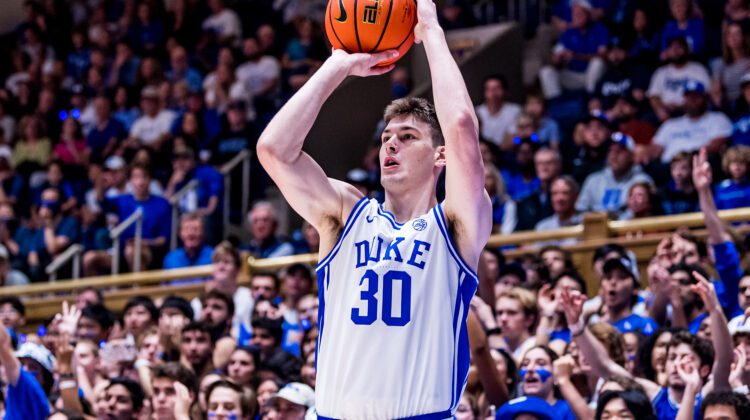 Kyle Filipowski is on a massive tear for Duke
Most of the focus on the Blue Devils after Saturday’s two-point win over Miami was on Jeremy Roach’s return from a toe injury, but it would be foolish to ignore just how good Filipowski has been (14-5) recently. The 7-foot freshman is averaging 21 points and 14.3 rebounds over his last three games while logging 35 minutes in each of those contests. That’s a hard thing to do when you’re the size of someone like Filipowski. Other than Alabama’s Brandon Miller, this guy has been as good as any freshman this season in college basketball. The Blue Devils will visit Virginia Tech tonight in Blacksburg.

Jalen Bridges is emerging for Baylor
Scott Drew knew entering this season that his perimeter troika of LJ Cryer, Adam Flagler, and five-star freshman Keyonte George would be as good as any in the sport. The key was finding an option on the baseline to complement them. That option looks like it’s going to be Bridges. The transfer from West Virginia has played at a different level over the past few weeks and is averaging 11.6 points and 7.8 rebounds in his last five games. The 6-7 Bridges was also 3-5 from three-point range in Saturday’s win at Oklahoma and made a big shot from long distance late in the game. Baylor will look to extend its winning streak to five games tonight against Kansas in Waco.

Nevada seeks a Quad 1 victory against New Mexico
President John F. Kennedy said that “A rising tide lifts all boats”. One could make the argument that’s what the Lobos are doing for the Mountain West. New Mexico’s 18-2 start has augmented the entire conference, especially after a pair of massive wins in the past week and a half against San Diego State and Boise State. The Lobos’ success means that other teams vying for at-large bids to the NCAA Tournament — like Nevada (15-5) — will have opportunities to boost their own resume when they play New Mexico. That’s what the Wolf Pack have tonight in Reno when they host the Lobos. As of Sunday, Steve Alford’s squad was ranked 33rd in the NET. Tip off is at 9 PM ET on CBS Sports Network.