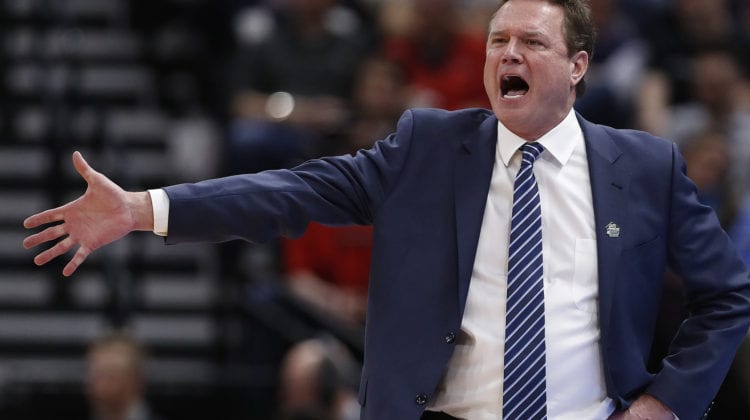 Kansas will have an opportunity to regain some momentum
Losing five games in seven attempts isn’t something that Bill Self is very familiar with, but that’s the predicament that Kansas finds itself in entering tonight’s game in Lawrence against Oklahoma State. This could be the start of the Jayhawks’ getting their mojo back. After tonight’s game against the Cowboys, Kansas will play three straight games against Iowa State and Kansas State — the two worst teams in the Big 12 — before finishing the regular season against Texas Tech, Texas, and Baylor. This team has a real chance to finish strong after a rocky stretch.

Gonzaga’s trip to BYU
The Bulldogs are going to have to play significantly better tonight in Provo than they did last week at Pacific. Gonzaga’s 18-point win last Thursday over the Tigers was a bit of an aberration, especially when you consider the fact that they trailed by one at halftime and looked both bored and disinterested for large portions of the game. BYU has separated itself as the second-best team in the WCC and is again on track to be an NCAA Tournament team under Mark Pope. Can the Cougars be more competitive against the Bulldogs than they were on Jan. 7th when they fell to Gonzaga by 17 in Spokane? We’ll find out tonight.

Iowa badly misses CJ Fredrick
Fran McCaffery’s squad is now 13-3 this season with Fredrick in the lineup and 0-3 when he is not following Sunday’s two-point loss at Indiana. The 6-3 sophomore has been sidelined the past few weeks due to a lower leg injury and even though he only averages 8.7 points, Fredrick’s game is about much more than just his offense. A capable ball mover and overall stabilizer, Fredrick currently has a total of 37 assists to just four turnovers this season and is also shooting 50 percent from three-point range. His presence alone helps create less double teams from opponents on Luka Garza in the low post and also gives Iowa another long distance shooter to help space the floor alongside both Jordan Bohannon and Joe Wieskamp. Iowa has now lost four of its last five games.