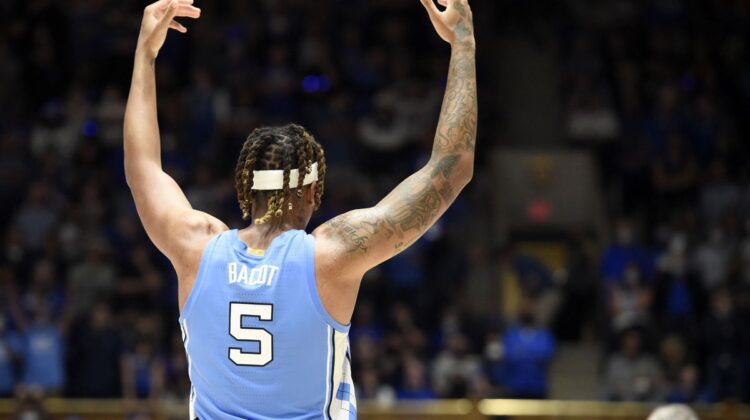 59 days from today there will be college basketball!

Check out below for our list of preseason All-Americans for the 2022-23 season:

Oscar Tshiebwe, Kentucky: The reigning AP National Player of the Year is back for another tour of duty in Lexington after a historical statistical season. The 6-9 Tshiebwe averaged 17.4 points and 15.1 rebounds a year ago and had seven games with at least 20 points and 15 rebounds. Prior to last season, the two best statistical rebounders that had ever played for John Calipari were Anthony Davis and Julius Randle, who each averaged 10.4 rebounds during their one season of college. Tshiebwe averaged almost five rebounds more each time that he took the floor a year ago.

Drew Timme, Gonzaga: Timme may not have gotten the attention that he deserved last season because of Chet Holmgren, but he still had a stellar campaign. Over the last two years, the 6-10 Timme has averaged 18.7 points and 6.9 rebounds while shooting an astronomical 62.1 percent from the field. This is quietly one of the best players that has played college basketball in the last two decades.

Armando Bacot, North Carolina: This 6-10 big man had a double-double in all eight of his postseason games last spring, averaging an impressive 15.1 points and 15.5 rebounds during that span. After leading North Carolina to within inches of a national title last spring, Bacot is back as a bonafide National Player of the Year candidate.

Hunter Dickinson, Michigan: Dickinson was so good two years ago as a freshman that many people may not have noticed how much better he got last season as a sophomore. After averaging 14.1 points and 7.4 rebounds in his first year of college basketball, Dickinson averaged 18.6 points and 8.6 rebounds in his second all while adding a new wrinkle to his arsenal — the three-point shot. Dickinson made 21 shots from long distance as a sophomore after making none as a freshman. He’s again in line to anchor things for Michigan.

Trayce Jackson-Davis, Indiana: Many thought that Jackson-Davis was a lock to head to the NBA after last year, but he decided to return to Bloomington for his senior season. A dominant force in the paint on both sides of the floor, the 6-9 forward is capable of dominating a game with both his interior scoring and rim protection. He averaged 18.3 points, 8.1 rebounds, and 2.3 blocks last season.

Marcus Sasser, Houston: This 6-2 guard only appeared in 12 games last season before being sidelined with a toe injury. After flirting with the NBA Draft, Sasser ultimately opted to return to school where he’ll again be a part of one of the best teams in the country. Sasser averaged 17.7 points a year ago in limited action and scored 20 in the 2021 Final Four against Baylor.

Caleb Love, North Carolina: Love’s overall shotmaking and level of play reached a different level late last season — especially in the NCAA Tournament. The 6-4 guard scored 30 points in the Sweet 16 against UCLA and tallied 28 in the Final Four against Duke. Like Bacot, Love returned to school with the intention of bringing another national title to Chapel Hill in 2023.

Jaime Jaquez, UCLA: A slew of nagging injuries hampered Jaquez last season, but when healthy, he’s the best wing in college basketball. Armed with the perfect blend of versatility, skill, and toughness, the 6-7 Jaquez should take on more of a featured role for UCLA in 2022-23 as the Bruins transition post-Johnny Juzang. He scored 18 or more points in five of his final eight games of last season.

Adama Sanogo, UConn: The favorite for Big East Preseason Player of the Year, Sanogo should continue to take target practice around the rim as a junior after pulverizing opponents as a sophomore. An improving shot blocker, the 6-9 center tallied 55 blocks last season while averaging 14.8 points and 8.8 rebounds. Sanogo only blocked 21 shots two years ago as a freshman.

Zach Edey, Purdue: The “Yao Ming” of college basketball, Edey is a mountain for other teams to match up with at 7-4. He’ll again be heavily featured for Purdue after averaging 14.4 points and 7.7 rebounds in just 19 minutes last season as a sophomore. Expect a big spike in production for this guy moving forward post-Trevion Williams.

Mike Miles, TCU: The broad shouldered Miles averaged 20.5 points in two NCAA Tournament games last spring and nearly led the Horned Frogs to the Sweet 16 before they fell just short against Arizona in the Round of 32. While he needs to become a more efficient scorer after shooting just 38.2 percent from the field last season, the 6-2 Miles is as confident of a guard as there is in the sport. He’ll anchor the backcourt for the Horned Frogs, who return all five starters and 89 percent of their scoring from last season.

R.J. Davis, North Carolina: Bacot and Love get the bulk of the attention when it comes to the Tar Heels, but the 6-foot Davis is also one of the best players in the sport. A New York native, Davis averaged 14.7 points, 6.5 rebounds, and five assists in six NCAA Tournament games last spring and scored 30 in the Round of 32 against Baylor.

Adam Flagler, Baylor: A year ago, Flagler was viewed as the next great guard in Baylor’s program. Then a slew of injuries occurred and he never was able to remain healthy. If that changes, the Bears may very well have the best player in the Big 12. A potent and shifty scorer, the 6-3 guard had four games last season with 22 or more points, including a 27-point effort against North Carolina in the NCAA Tournament. Flagler also had 13 points in 22 minutes in the 2021 national title game against Gonzaga.

Isaiah Wong, Miami: The new “Guard U” has another burgeoning star in the 6-3 Wong, who shined during last season’s run to the Elite Eight. Wong averaged 16.3 points in four NCAA Tournament games last spring and should be the focal point for Miami in 2022-23 following the departures of both Charlie Moore and Kameron McGusty.

Ryan Kalkbrenner, Creighton: The reigning Big East Defensive Player of the Year, Kalkbrenner is one of the primary reasons why Creighton is in position to potentially have its best team ever under Greg McDermott. An elite rim protector, the 7-1 Kalkbrenner had nine games last season with four or more blocks and also averaged 13.1 points and 7.7 rebounds.