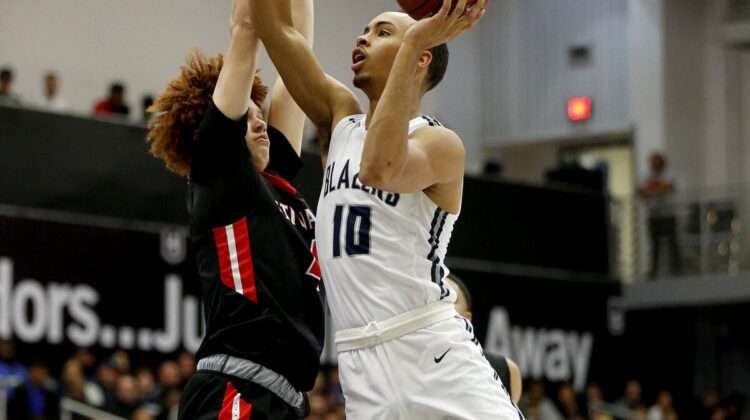 WESTWOOD — Tyger Campbell is one of the best returning point guards in college basketball, but he’s not the only floor general that’s going to start games for UCLA during the upcoming season.

During Thursday’s practice in Westwood, five-star freshman Amari Bailey regularly initiated offense for the Bruins, getting into the teeth of the defense at will and regularly setting the table for his teammates.

“He’s an elite creator,” UCLA head coach Mick Cronin said of the 6-4 Bailey following Thursday’s practice. “He’s either going to create for himself or create for his teammates. He’s going to get Tyger (Campbell) shots.”

That may be one of Bailey’s biggest areas of value for the Bruins.

Throughout the past three seasons, Campbell averaged at least 30 minutes at point guard for UCLA and was the program’s only pure floor general. That will change with the addition of Bailey, who should instantly allow Campbell to slide off the ball. Campbell (11.9 points, 4.3 assists) — who shot 41 percent from three-point range last season as a junior after shooting 25 percent from three-point range as a sophomore — regularly drained outside shots with regularity during Thursday’s practice.

With Bailey and freshman point guard Dylan Andrews — another Top-50 recruit — the Bruins will likely regularly play multiple floor generals together at the same time.

“We’re at the opposite end of the spectrum compared to where we were last year in terms of the makeup of our team,” Cronin said. “We’re much more athletic on the perimeter. Last year, with Johnny (Juzang) and Jules (Bernard), we were more of a screening team that got people open shots on the perimeter. This year, with Amari (Bailey), Dylan (Andrews), and Abramo (Canka), we’re much more athletic. We’re a better ball handling team and that’s directly because of Amari. He’s a big guard and most of all, he’s a pure point guard.”

UCLA is currently ranked SIXTH in the ROTHSTEIN 45.