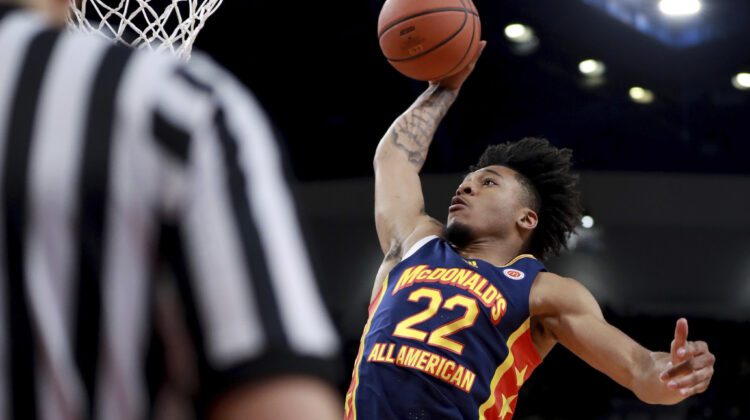 VILLANOVA — Cam Whitmore has yet to play a game for Villanova, but he’s already displayed the potential to be one of the best freshmen in college basketball during the 2022-23 season.

A consensus five-star recruit, the 6-6 forward was the MVP of the FIBA U18 Americas Championship earlier this summer and has also made a strong early impression during preseason workouts.

On Thursday during a team practice on campus, Whitmore displayed his full offensive arsenal, finishing dunks around the rim with authority and regularly penetrating against defenders at will.

“Cam (Whitmore) is very violent offensively,” Villanova head coach Kyle Neptune told College Hoops Today on Thursday. “Josh Hart and Eric Paschall were both very hard and explosive drivers. Cam has the best of both of them.”

Whitmore also has the potential to be a lethal outside shooter with an effortless stroke. He regularly made outside shots during Thursday’s practice all while showcasing a textbook stroke. Whitmore shot 45.5 percent from three-point range during the FIBA U18 Americas Championship.

“The difference in his offensive game is when he’s making three-point shots,” Neptune said. “That’s what he’s doing right now. When he’s on, he’s as gifted as anyone offensively.”

Villanova is entering its first season since 2001 without Jay Wright as its head coach and its first under Neptune, who coached at Fordham last year. The Wildcats return four of their top six scorers — Justin Moore, Caleb Daniels, Brandon Slater, and Eric Dixon — from last season’s team that lost to Kansas in the Final Four. Moore is currently out indefinitely with an achilles tear.

Villanova is currently ranked 14th in the ROTHSTEIN 45.