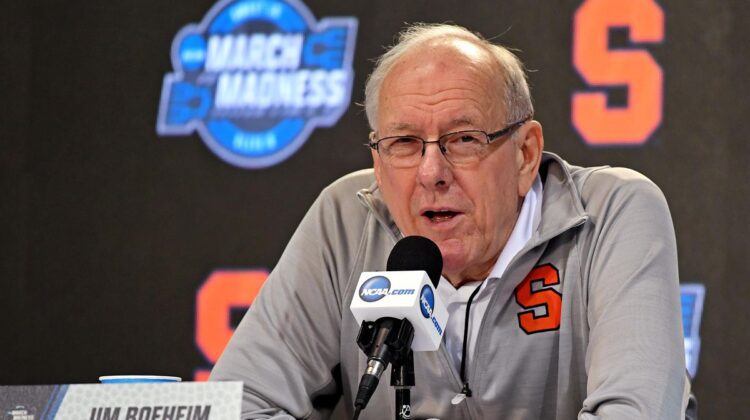 SYRACUSE — Jim Boeheim is ready for a redemption tour.

On the heels of the first losing season in his near five-decade career as a head coach, the Hall-of-Famer is beyond optimistic regarding his team’s potential for the upcoming year.

“We’re going to be in the NCAA Tournament,” Boeheim — who is about to begin his 47th season as the Orange’s head coach — said after Tuesday’s practice in Syracuse. “This is the best team we’ve had in a while.”

When asked if this Syracuse team could be comparable to the teams that recently reached the Sweet 16 in both 2021 and 2018, Boeheim didn’t hesitate.

“I think we could be better,” he added.

The Orange are noticeably deeper, longer, and more athletic than they were last season thanks to the influx of a six-man freshman class, headlined by Top-50 prospect Judah Mintz. Whether or not Syracuse is dramatically better, remains to be seen.

There’s two known returning commodities — senior guard Joe Girard (13.8 points) and 6-11 big man Jesse Edwards (12 points, 6.5 rebounds, 2.8 blocks) — along with two guys — Symir Torrence and Benny Williams — who were minor pieces to the puzzle a year ago. Boeheim said he expects Girard to average “at least 20 points” this season as he transitions to a full-time role at shooting guard and called the 6-8 Williams an “X-Factor”.

“He has to get 10-11 points and six rebounds for us,” Boeheim said of Williams — a former Top-30 recruit — who only averaged 1.9 points and 1.4 rebounds last season as a freshman.

“He’s as explosive a point guard as we’ve had here in a long time” Boeheim said of Mintz, who regularly got into the teeth of the defense during Tuesday’s practice. “He’s like Johnny Flynn, but he’s much bigger. I think he can get 14-15 points every game and he could get 25 some nights.”

Boeheim added that a freshman — either Chris Bunch or Justin Taylor will start at small forward — for Syracuse with the other likely slotted for the sixth man role. Both are between 6-6 and 6-7. The Orange’s staff is also high on 6-6 freshman Quadir Copeland, who Syracuse is counting on to provide some offensive pop in reserve.

“He gives us a different dimension,” Boeheim said of Copeland. “He’s more like a Josh Pace type except he’s a righty.”

Preseason optimism is a common thing in college basketball, especially on the heels of a disappointing year. For Boeheim, it’s different. Last season was the first season that he’s ever finished under .500 as a head coach, a role that he began at his alma mater in 1976.

“That was hard,” Boeheim said of going through a losing season for the first time. “We gave games away last year. We’re so much different this year. We’re going to play 9-10 guys. We’re faster. We’re quicker. We’re better.”