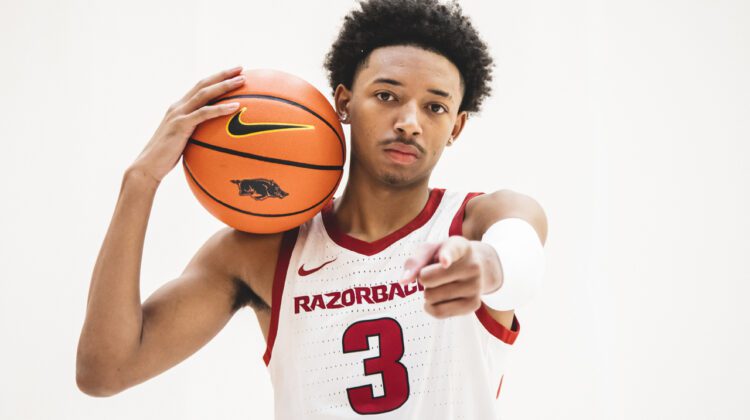 The bar has been set high for Arkansas freshman Nick Smith and he’s yet to play a college game.

That’s what happens when you’re a five-star prospect and projected to be one of the top picks in the 2023 NBA Draft.

Smith’s talent has always been undeniable, but the other areas of his game have also stood to his coach.

“His ability to lead is very un-freshmanlike,” Arkansas head coach Eric Musselman told College Hoops Today on Wednesday regarding the 6-5 Smith. “Nick has great toughness. We’re going to need leadership from our freshmen because we’re so inexperienced. This is by far the youngest team that I’ve had in my life. This is the most teaching that I’ve ever had to do. We’ve got great talent, but we lack collegiate experience.”

But they do have talent.

Smith is part of a loaded freshman class for Arkansas that also features two other five-star prospects in Anthony Black and Jordan Walsh. Four-star prospects Barry Dunning and Derrian Ford are also newcomers while a pair of transfers — Ricky Council IV (Wichita State) and Trevon Brazile (Missouri) — are expected to play major roles. Junior guard Davonte Davis (8.3 points) is the only player returning who averaged double-figure minutes on last year’s team that lost to Duke in the Elite Eight. It was the second straight year that the Razorbacks’ season ended in a regional final as Arkansas lost to eventual national champion Baylor in the 2021 NCAA Tournament.

The focal point of the group though, is expected to be Smith.

Can the 6-5 guard keep Arkansas among the nation’s elite despite a supporting cast that’s barely played together?

It’s one of the fascinating questions entering the 2022-23 season, but one no doubt that Musselman — who has regularly put rosters together effectively in a short period of time — is ready to try and answer.

“We obviously expect great things from Nick this season,” Musselman said of Smith. “I think his ability to create his own shot and his length both really stand out. His ability to understand spacing and his ability to be creative when plays break down have been really impressive, but we need all of our freshmen to play big for us. Anthony Black is unique at 6-7 or 6-8 and is one of the best guard rebounders that I’ve been around. Jordan Walsh should be able to play three positions for us and has great toughness, too.”

The standard is incredibly high at Arkansas after coming within inches of the Final Four in back-to-back seasons.

The question is, can this team get back to the same spot in 2023 with a roster that has tremendous talent, but limited seasoning?

“It all depends on how we improve over the course of the season,” Musselman said. “The last two years — we got better and better as the year went on. That’s what this team has to do.”

Arkansas is currently ranked 16th in the ROTHSTEIN 45.