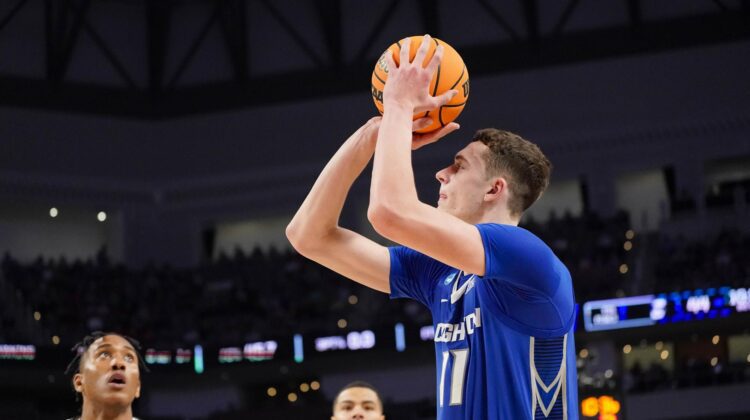 Creighton’s Ryan Kalkbrenner (13.1 points, 7.7 rebounds, 2.6 blocks) is the reigning Big East Defensive Player of the Year, but his coach believes that the 7-1 center may add a new wrinkle at the other end of the floor.

“He’s shooting threes in practice and I would expect that he’ll continue to shoot them once we start playing games,” Creighton head coach Greg McDermott said this week on the College Hoops Today Podcast.

Why is that so significant?

Kalkbrenner has only made three three-point shots during the first two years of his college career and only attempted 14 total shots from long distance during that span. Becoming a bonafide threat from three-point range would add a new dimension to Kalkbrenner’s game and ultimately, Creighton’s offense.

“You will see it,” McDermott said in reference to Kalkbrenner’s outside shooting ability. “He’s worked really hard at it. Obviously, he aspires to play in the NBA and I think he will play in the NBA. 10 years ago, there were three guys like him on every NBA roster — now there’s one. He has to be able to do some different things.”

In addition to Kalkbrenner, Creighton returns three other players — Ryan Nembhard, Trey Alexander, and Arthur Kaluma — who averaged 26.6 minutes or more on last season’s team that lost to Kansas in the second round of the NCAA Tournament. The Jays also added South Dakota State transfer Baylor Scheierman (16.2 points, 7.8 rebounds, 4.5 assists).

Creighton is currently ranked THIRD in the ROTHSTEIN 45.