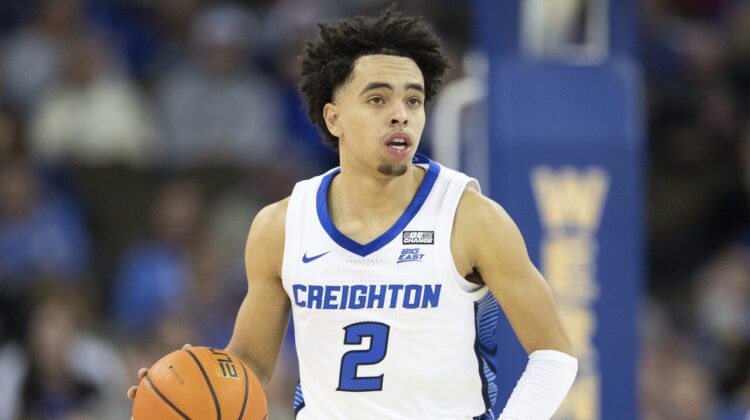 Check below for our list of 5 teams on the rise during the 2022-23 college basketball season.

Creighton: The Bluejays trailed eventual national champion Kansas by a point with less than two minutes remaining in the Round of 32 last March without the Big East Rookie of the Year — Ryan Nembhard (11.1 points, 4.4 assists, 3.1 rebounds) — and the Big East Defensive Player of the Year — Ryan Kalkbrenner (13.1 points, 7.7 rebounds, 2.6 blocks) — in the lineup due to injuries. Both of those players are back healthy and so are sophomores Trey Alexander (7.4 points) and Arthur Kaluma (10.4 points, 5.4 rebounds), who should both be All-Big East caliber players in their second seasons of college basketball. Meanwhile, South Dakota State transfer Baylor Scheierman (16.2 points, 7.8 rebounds, 4.5 assists) should fit in seamlessly as Creighton’s fifth starter. The Big East goes through Omaha.

Texas A&M: Player retention is the key to success in college basketball and the Aggies have plenty of it. Buzz Williams returns five of his top eight scorers and four starters — Wade Taylor IV, Manny Obaseki, Tyrece Radford, and Henry Coleman — from last season’s team that won 27 games and reached the finals of both the SEC Tournament and the Postseason NIT. Both Coleman and Radford averaged in double figures. Texas A&M also added three key additions in transfers Dexter Dennis (Wichita State), Julius Marble (Michigan State), and Andersson Garcia (Mississippi State). Williams has this program in prime position to reach the NCAA Tournament for the first time since he’s arrived in College Station.

Oklahoma: Porter Moser got blood from a stone last season as the offensively challenged Sooners only averaged 68.5 points en route to 19 wins and an appearance in the Postseason NIT. The NCAA Tournament should be well within reach in 2023. Why? Nevada transfer Grant Sherfield (19.1 points, 6.4 assists, 4.2 rebounds). The veteran guard is capable of taking over a game either by scoring or facilitating and should take immediate pressure off this team in the half-court offensively. GW transfer Joe Bamisile should also play a major role (16.3 points, five rebounds) and blend nicely with a quality returning nucleus of veterans in Tanner Groves, Jacob Groves, and Jalen Hill. Two Top-100 freshmen — Otega Oweh and Milos Uzan — should also make an immediate impact. Oklahoma has a more than legitimate chance to hear its name called on Selection Sunday.

Wyoming: The Cowboys got a taste of the NCAA Tournament last spring when they reached the First Four and lost to Indiana. In 2023, they’ll be disappointed if they don’t enjoy a bigger sample size. Wyoming returns college basketball’s most underrated one-two punch in Hunter Maldonado (18.5 points, 6.3 assists, 5.7 rebounds) and Graham Ike (19.5 points, 9.6 rebounds) along with three capable role players who averaged 20 minutes or more in Brendan Wenzel, Jeremiah Oden, and Xavier DuSell. Meanwhile, a troika of Pac-12 transfers — Ethan Anderson (USC), Max Agbonkpolo (USC), and Jake Kyman (UCLA) — have significantly raised the expectations in Laramie. After a 25-win season a year ago, Jeff Linder has the Cowboys in position to compete for a Mountain West regular season title while also earning a quality seed in the 2023 NCAA Tournament.

Saint Louis: Travis Ford led this program to 23 wins last season without the Atlantic 10 Preseason Player of the Year — Javonte Perkins — who was lost for the season in October with a torn ACL. Perkins — who averaged 17.1 points two seasons ago — is back and joins a nucleus of players — Gibson Jimerson, Yuri Collins, Francis Okoro, and Fred Thatch — who were the Billikens’ top four scorers from a year ago. The 6-foot Collins led the nation in assists last season at 7.9 per outing. Ford also added a potential starter in Missouri transfer Javon Pickett (11.1 points). Saint Louis has enough talent to be one of the best non power conference teams in the country this season not named Gonzaga.