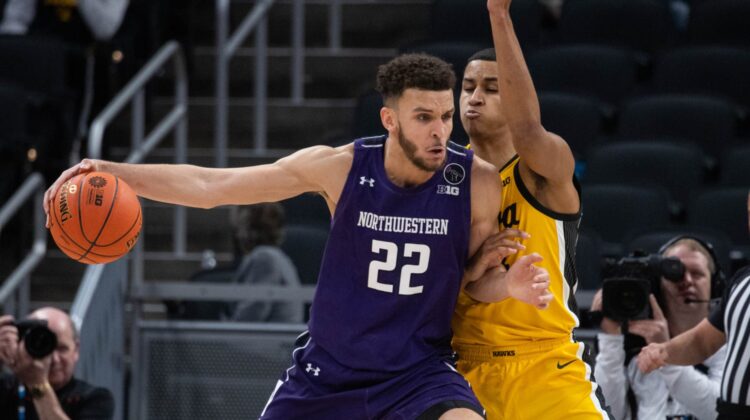 Check below for our list of 30 impact transfers for the 2022-23 college basketball season.

Pete Nance, North Carolina: How will the Tar Heels replace Brady Manek? This guy. The 6-10 Nance gives North Carolina another all-conference caliber player and the type of power forward that can open up the floor for Armando Bacot in the low post. Nance shot 45.2 percent from three-point range last season while he was at Northwestern.

Baylor Scheierman, Creighton: The Bluejays return four key contributors — Ryan Nembhard, Trey Alexander, Arthur Kaluma, and Ryan Kalkbrenner — from last year’s team that lost to Kansas in the Round of 32, but the addition of Scheierman is what truly may take Creighton to a different level. Skilled, cerebral, and always under control, this 6-6 veteran is tailor made for Greg McDermott’s system. Scheierman averaged 16.2 points, 7.8 rebounds, and 4.5 assists last season as he led South Dakota State to the NCAA Tournament.

Antonio Reeves, Kentucky: The sharpshooting Reeves made a major impression on his new team last summer during a foreign tour in the Bahamas, as he averaged 17 points and shot 51.9 percent from three-point range. After being a focal point during the past few seasons at Illinois State, Reeves will now fill a critical component for Kentucky as a sniper from long distance.

Jacob Grandison, Duke: Jon Scheyer desperately needed to add experience to his roster and he’s got just that with Grandison, who has already played four full seasons of college basketball. The 6-6 wing was a multi-year starter for Illinois and was able to regularly stay on the floor thanks to elite shooting (41 percent), solid passing, and capable defense. Grandison does all of the little things well. Don’t discount him from cracking the Blue Devils’ starting lineup in 2022-23.

Kevin McCullar, Kansas: McCullar’s versatility and toughness are tailor made for Bill Self, who will use this 6-6 senior in different positions on the floor during the upcoming season. McCullar averaged 13.7 points in three NCAA Tournament games last spring for Texas Tech, including a 17-point performance in the Sweet 16 against Duke.

Tyrese Hunter, Texas: Chris Beard was attracted to Hunter because of his defense. The rest of his game isn’t bad, either. Last season’s Big 12 Rookie of the Year was the backbone of Iowa State’s Sweet 16 run last March and tallied 11 steals in three NCAA Tournament games. He’ll fit right in with Beard in Austin.

Fardaws Aimaq, Texas Tech: Despite a recent foot injury, the 6-11, 245 pound Aimaq is our pick to quickly become a fan favorite in Lubbock. Skilled and smooth for his gargantuan size, Aimaq is also incredibly productive as he averaged 18.9 points and 13.6 rebounds last season at Utah Valley including 13 games with at least 15 points and 15 rebounds.

De’Vion Harmon, Texas Tech: Harmon’s third school in the last three years hopes that its end result is the same as the past two — the NCAA Tournament. A double-figure scorer in each of his past two seasons for Oregon and Oklahoma respectively, the veteran lefty should have a major role in the backcourt for Mark Adams and Texas Tech.

Jaedon LeDee, San Diego State: Well embedded moles in Southern California are foaming at the mouth when they discuss LeDee’s potential. A former Top-100 recruit, the 6-9, 240 pound LeDee is primed to shine for the Aztecs at power forward during the upcoming season after redshirting last year. LeDee has previously played for both TCU and Ohio State.

Johni Broome, Auburn: Broome isn’t Jabari Smith, but that doesn’t mean that he’s not going to be one of the best big men in the SEC this season. After regularly putting up massive numbers at Morehead State, Broome averaged 17.7 points and eight rebounds this past summer during Auburn’s foreign tour in Israel, which featured a matchup with the Israeli National Team.

Sean McNeil, Ohio State: McNeil shot better than 36 percent from three-point range in each of the past two seasons at West Virginia and he’ll now look to bring that accuracy from long range to Columbus. A 6-3 guard, McNeil had eight games last season where he made three or more three-point shots.

Jermaine Couisnard, Oregon: Dana Altman’s decision to hire former Gamecocks assistant Chuck Martin as an assistant helped expedite Couisnard’s decision to commit to Oregon, where he’ll form a potent perimeter combination next to Will Richardson. Broad shouldered and seasoned, the 6-4 Couisnard averaged in double figures during all three years of his college career at South Carolina.

Tristen Newton, UConn: After putting up video game-like numbers last season at East Carolina — 17.7 points, five assists, 4.8 rebounds — Newton will now be asked to be part of a UConn team that fully expects to again be a high seed in the NCAA Tournament. His evolution is a critical component to the Huskies’ overall ceiling in 2022-23.

Jaelin Llewellyn, Michigan: This is the third straight season that Juwan Howard has brought in a graduate transfer at point guard and for the third straight season, this position will be the biggest question mark in Ann Arbor. Just like his predecessors — Mike Smith (Columbia) and Devante Jones (Coastal Carolina) — Llewellyn has the chops to be a productive starter in the Big Ten after averaging 15.7 points and 4.1 rebounds a year ago at Princeton.

Nijel Pack, Miami: The Hurricanes’ program is quickly building a reputation for its guard play and Pack is next in line to join. After averaging 17.4 points last season at Kansas State, Pack will now be asked to share the offensive load with Isaiah Wong and Jordan Miller as Miami aims to build off the momentum created by last spring’s run to the Elite Eight.

Mark Sears, Alabama: Nate Oats desperately needed insurance in the backcourt following Jahvon Quinerly’s knee injury against Notre Dame in the NCAA Tournament. He got it with Sears, who was a star last season at Ohio, averaging 19.6 points, six rebounds, and four assists.

Terrence Shannon Jr., Illinois: Brad Underwood has repeatedly raved about Shannon’s work ethic after he decided to transfer from Texas Tech. Illinois does not return a player who averaged more than 5.9 points last season, which means the 6-6 Shannon — who averaged in double figures in each of the past two years for the Red Raiders — needs to be ready for a primary scoring role if the Illini are again going to compete for a Big Ten regular season title.

Matthew Mayer, Illinois: Much like Shannon, Mayer has to be a consistent offensive presence for Illinois if it’s again going to finish in the top tier of the Big Ten. While he was never solely featured during his four years in Waco, the 6-9 guard was a key member of the Baylor team that won the 2021 national title and averaged 8.1 points or more in each of the last two seasons.

Kendric Davis, Memphis: Transferring within the same conference is always an interesting dynamic, but Davis is more than up for the spotlight. The reigning American Athletic Conference Player of the Year should shine for Memphis at FedEx Forum, as he aims to do the one thing next season that he’s yet to do in his decorated career — play in the NCAA Tournament.

Kyle Lofton, Florida: Lofton did everything except sell popcorn during his four years in Olean and will now get a crack at the SEC. A double-figure scorer during all four of his years at St. Bonaventure, this veteran floor general will play a critical role in Florida’s first season under Todd Golden.

Ben Vander Plas, Virginia: Vander Plas had 17 points and five rebounds when Ohio upset Virginia in the 2021 NCAA Tournament. Now he joins the Cavaliers as a graduate transfer, where he’ll immediately be expected to stretch the defense. The 6-8 forward made 67 three-point shots last season for the Bobcats.

KJ Williams, LSU: Every program in the country wanted the 6-10 Williams when he put his name in the transfer portal. He opted to head to LSU and play for Matt McMahon, who coached him at Murray State. Williams has averaged 8.5 rebounds during the past two seasons — McMahon will happily settle for that next year in the SEC.

Keion Brooks, Washington: Mike Hopkins plans to feature this skilled 6-7 forward, who had several promising moments during his three years at Kentucky. Brooks should also be a seamless fit in Washington’s 2-3 zone, which will be pivotal as to whether or not the Huskies can return to the NCAA Tournament picture.

Manny Bates, Butler: Don’t be shocked if Bates is the most impactful transfer in the Big East this season. The 6-11 big man did not play last year due to a shoulder injury, but averaged 2.7 blocks two years ago at NC State and 2.9 blocks three years ago as a freshman. Remember the name.

Andre Curbelo, St. John’s: A year ago, Curbelo was a Preseason All-American. Now, he’s a bit of an afterthought. If he’s anywhere in between, it’s good news for St. John’s. Look for this New York native to flourish in Mike Anderson’s frenetic system as he forms a lightning quick backcourt combination along with Posh Alexander.

David Jones, St. John’s: Jones became a national name last season when he scored 33 points and grabbed 14 rebounds when DePaul won at Louisville in December. Don’t be shocked if he remains as a national name throughout the duration of the 2022-23 season. The 6-6 Jones (14.5 points, 7.4 rebounds) is tailor made to be a small ball four-man in St. John’s high octane attack and should explode like a volcano for the Red Storm.

Grant Sherfield, Oklahoma: Capable of taking over a game by either scoring or facilitating, the 6-2 Sherfield is the perfect addition for the offensively challenged Sooners, who only averaged 68.5 points last season. A stat sheet stuffer during his past two years at Nevada, Sherfield should excel by playing with a better supporting cast. He averaged 18.9 points, 6.3 assists, and 3.9 rebounds over the past two years with the Wolf Pack.

Bryce Hopkins, Providence: Blessed with gifts from God physically, the 6-7 Hopkins was a major get for Ed Cooley and Providence after spending just one season at Kentucky. He’ll aim to make a big jump as he’s expected to step in as the Friars’ starting power forward in 2022-23.