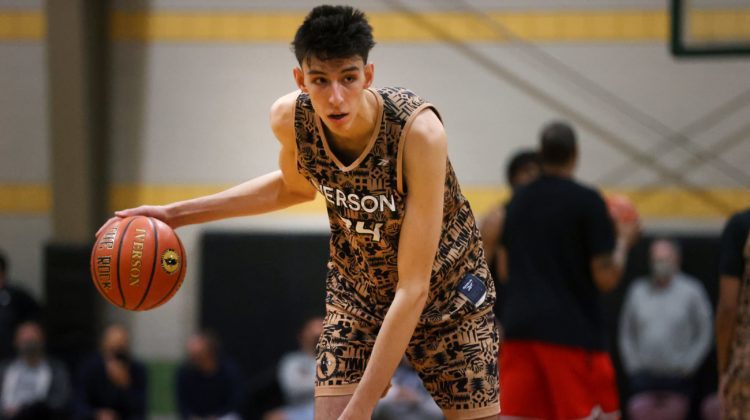 Check below for our list of 25 impact freshmen for the 21-22 college basketball season.

Chet Holmgren, Gonzaga: America is going to quickly run out of adjectives for the 7-1 Holmgren, who is already in the conversation to be the top overall pick in the 2022 NBA Draft. He’ll quickly form what will be college basketball’s top power forward/center combo alongside Drew Timme in Gonzaga’s front court.

Nolan Hickman, Gonzaga: This Seattle native initially committed to Kentucky before ultimately winding up in Spokane. The 6-1 Hickman should have an immediate impact in Gonzaga’s backcourt as he helps ease some of the ball handling responsibilities on Andrew Nembhard.

Hunter Sallis, Gonzaga: Armed with great size at 6-5, Sallis can play both on and off the ball. A five-star prospect, Sallis’ decision to commit to Gonzaga is just another sign of how the Bulldogs’ program is now regularly able to recruit the top high school players in the country.

Paolo Banchero, Duke: Banchero is the one of the main reasons why Mike Krzyzewski’s final season in Durham could be a memorable one. The 6-10 forward can handle the ball, face the basket, and also be a menace on the block. Anything less than an All-American caliber freshman year would be a surprise.

AJ Griffin, Duke: A multi positional talent with high upside, Griffin is the type of interchangeable piece that has flourished in Duke’s program for decades. A five-star prospect, this 6-7 wing should be one of the top players in the ACC next season.

Trevor Keels, Duke: Guard play was a major reason for the Blue Devils’ struggles last season and that’s an area where Keels can provide aid. Armed with good size at 6-5, Keels has terrific strength and wiry athleticism. Expect him to play an immediate role in Durham.

TyTy Washington, Kentucky: John Calipari has built a roster for next season that’s primarily dependent on transfers, but it would be foolish to forget about Washington. After initially committing to Creighton, this 6-3 lead guard should form a capable perimeter in Lexington alongside Georgia transfer Sahvir Wheeler.

Jabari Smith, Auburn: Auburn is in position to be one of the most improved teams in the country and the addition of Smith is a major reason why. With Smith, North Carolina transfer Walker Kessler and Allen Flanigan, the Tigers should have one of the top front court triumvirates in college basketball.

Patrick Baldwin Jr., Milwaukee: A five-star prospect, Baldwin could have played anywhere in the country, but opted to stay home in Milwaukee and play for his father, Patrick Baldwin Sr. His commitment instantly made every game this program plays — and the entire Horizon League — infinitely more interesting.

Kennedy Chandler, Tennessee: Smooth, steady, and always under control, Chandler can seamlessly run a team and get a unit into its offense. He’ll play a massive role for Rick Barnes and Tennessee this season.

Caleb Houstan, Michigan: A projected lottery pick in 2022, the 6-8 Houstan is an effortless scorer who averaged 17 points this past summer for Canada’s U19 team at the FIBA World Cup in Latvia. His addition is one of many reasons why Michigan is forecasted as a potential Final Four team in 2022.

Moussa Diabate, Michigan: 6-9, long, and athletic, Diabate can run the floor like a deer and also finish in transition. His length and competitive spirit will give Michigan a different dimension up front than it has with both Brandon Johns and Hunter Dickinson.

Jalen Duren, Memphis: Being compared to Chris Webber before you ever step foot on a college campus is a high bar, but Duren is ready for the challenge. The 6-10 big man has the talent, size, and skill to be one of the top picks in the 2022 NBA Draft. His decision to reclassify and play for Memphis this season completely changed the ceiling on Beale Street.

Emoni Bates, Memphis: A generational talent, the 6-9 Bates followed Duren’s lead and reclassified into the 2021 class to play for Penny Hardaway and Memphis. The Tigers plan to use Bates at multiple positions during the upcoming season — including point guard.

JD Davison, Alabama: A freak athlete, the 6-2 Davison has incredible speed in the open floor and should be a perfect fit in Nate Oats’ high octane attack. With Davison, Jahvon Quinerly, and Jaden Shackelford, Alabama has a guard core intact that should keep it in the upper echelon of the SEC.

Kendall Brown, Baylor: Scott Drew built a championship program in Waco by valuing experience and seasoning, but that doesn’t mean that Brown won’t have a major role for Baylor as a freshman. The 6-8 forward has great length and can finish in traffic. He’ll find an instant place in the Bears’ rotation.

Peyton Watson, UCLA: Mick Cronin loves players who love to defend and that’s just what he’s getting in the 6-7 Watson, who played for USA Basketball’s U19 team this past summer in Latvia. Expect Watson — a five-star prospect — to immediately challenge for a starting spot in Westwood.

Bryce McGowens, Nebraska: After initially committing to Florida State, McGowens opted to head to Lincoln to attempt to lead the Cornhuskers’ program to the NCAA Tournament for the first time since 2014. Blessed with good length and size for his position at 6-7, look for Fred Hoiberg to use this five-star prospect in different spots on the floor as he hopes to create a potent perimeter troika with McGowens, his brother Trey McGowens, and Arizona State transfer Alonzo Verge.

Benny Williams, Syracuse: Jim Boeheim loves long athletes and he’s got one that’s tailor made for the 2-3 zone in Williams. While he still needs to add weight to his slender frame, this 6-8 forward should instantly be a factor for the Orange, who return their starting backcourt — Joe Girard and Buddy Boeheim — from last year’s team that reached the Sweet 16.

Aminu Mohammed, Georgetown: Sustaining success will now be the challenge for Patrick Ewing after Georgetown’s surprise run to the Big East Tournament title last March. He’s got a chance to achieve that this season because of the addition of Mohammed, a five-star wing who should pair nicely with Dante Harris in the Hoyas’ back court.

Tamar Bates, Indiana: Smooth and skilled, Bates was originally committed to Texas before opting to play for Mike Woodson in Bloomington. Don’t be shocked if he finds a place in the Hoosiers’ starting lineup and instantly performs like one of the best freshmen in the Big Ten.

Efton Reid, LSU: Will Wade has consistently been one of the top offensive coaches in the SEC and he’ll find ways to effectively use the 7-foot Reid, who has different facets to his offensive repertoire. Capable of either facing the basket or posting up, Reid has the chops to average in double figures as a freshman.

Harrison Ingram, Stanford: Jerod Haase lost one five-star freshman in Ziaire Williams and he’s replacing him with another in Ingram. The Cardinal need Ingram to perform like an All-Pac-12 player if they hope to eventually make the NCAA Tournament for the first time during Haase’s tenure.

Max Christie, Michigan State: The Spartans only shot 32 percent from three-point range as a team last season and that’s where the 6-6 Christie should provide immediate relief. This is a critical piece to monitor in East Lansing.

Ryan Nembhard, Creighton: Greg McDermott lost five starters from last year’s team that reached the Sweet 16, but Creighton has a chance to be in the Big East mix because of the addition of Nembhard. Always poised and under control, Nembhard plays well beyond his years and averaged 15.1 points and 6.7 assists this past summer for Canada’s U19 team at the FIBA World Cup in Latvia. This kid is a gamer.