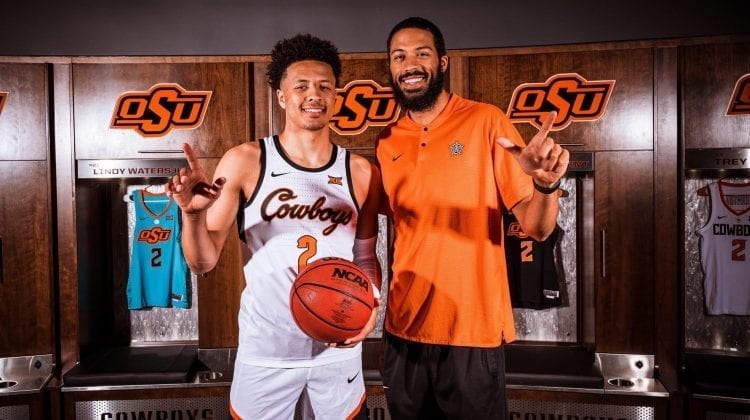 Check below for our list of 25 impact freshmen for the 20-21 college basketball season.

Cade Cunningham, Oklahoma State: The Cowboys will be appointment television each time they play next season because of Cunningham. This 6-7 point guard would have likely been the top pick in the 2020 NBA Draft if he was eligible — he’s that good.

Evan Mobley, USC: Andy Enfield lost one elite big man following last season in Onyeka Okongwu, but he’s replacing him with another in Mobley. Look for this talented 7-footer to form a potent power forward-center combination up front with his brother Isaiah, who will be a sophomore for USC next season.

Scottie Barnes, Florida State: Does the 6-8 Barnes have a chance to be as good as any freshman that Leonard Hamilton has ever coached? It’s not out of the realm of possibility. Armed with elite ball skills for his size, Barnes should help keep Florida State at the top of the ACC with Virginia, Duke, North Carolina, and Louisville.

B.J. Boston, Kentucky: Blessed with great length at 6-6, this do-everything wing has the ability to terrorize a defense either at the rim or from long distance. Boston’s production has to be at a high level if Kentucky is going to be one of the best teams in the country in 20-21.

Terrence Clarke, Kentucky: Like Boston, Clarke is an impact wing that will have to produce at a high level for Kentucky to be one of the best teams in the country next season. Widely regarded as a prolific perimeter scorer while he was on the EYBL circuit, the 6-6 Clarke carves up his opponents with just the right blend of power and athleticism.

Devin Askew, Kentucky: John Calipari went to California to tab this 6-3 point guard, who played his high school basketball at Mater Dei. First-year floor generals are always under a microscope when they play for Calipari and Askew will be no different. The Wildcats need major mileage out of this kid.

Jalen Suggs, Gonzaga: A big lead guard with great size at 6-5, Suggs should fit in seamlessly on the perimeter alongside both Joel Ayayi and Corey Kispert. His decision to attend college in Spokane is one of the many reasons why many expect Gonzaga to again be one of the top teams in the country next season..

Greg Brown, Texas: Shaka Smart should have his best team yet at Texas and a big reason for that is the addition of Brown. An Austin native, this 6-8 forward has elite bounce and is an explosive athlete. Look for Brown and sophomore Kai Jones to form a devastating front court combination thanks to their length and agility.

Ziaire Williams, Stanford: Jerod Haase sent handwritten Williams letters for 365 straight days in an effort to secure his commitment to Palo Alto. When you see him play, you’ll see why. This 6-8 forward will be one of the best players in the country in 20-21.

Josh Christopher, Arizona State: Christopher’s commitment to the Sun Devils was a transcendent moment for Arizona State’s program. A five-star prospect, look for this California native to be part of a lethal perimeter next season in Tempe.

Marcus Bagley, Arizona State: While Christopher is garnering a significant amount of attention around Arizona State’s program, it would be foolish to forget about Bagley. The brother of NBA forward and former Duke star Marvin Bagley, Marcus Bagley is an elite shooter that boasts tremendous efficiency on offense. Don’t be shocked if he winds up as a starter for Bobby Hurley’s squad in 20-21.

Jaden Springer, Tennessee: A power guard with a 6-7.5 wing span, Springer has the ability to guard multiple positions due to his overall strength. Combine that defensive ability with a terrific mid-range game on offense and Rick Barnes should be getting one heck of a player in Knoxville.

Keon Johnson, Tennessee: Well embedded moles in Knoxville love this 6-5 guard, who should join an already deep perimeter that features Santiago Vescovi, Josiah-Jordan James, and Oregon transfer Victor Bailey. A five-star prospect, expect Johnson to be one of the top freshmen in the SEC in 20-21.

Jalen Johnson, Duke: An underrated facilitator, this 6-8 forward has the highest ceiling out of anybody in the Blue Devils’ recruiting class. Capable of making the correct pass or displaying quality range from deep, Johnson is a multidimensional talent that should blossom next season in Durham.

Jeremy Roach, Duke: Replacing Tre Jones is no easy task, but that’s just what Roach will undertake next season. This 6-2 floor general is expected to get the keys to the car for Duke and should instantly display that he’s more than adept at creating opportunities for his teammates.

Adam Miller, Illinois: Miller should have a major role on what should be the best team Illinois has had since it went to the national title game in 2005. If Brad Underwood shifts to a smaller lineup with four guards, Miller could have an opportunity to be a starter and one of the top newcomers in the Big Ten.

Earl Timberlake, Miami: Miami has a legitimate chance to be one of the most improved teams in the country next season and the addition of Timberlake is a major reason why. The 6-6 forward needs to produce for the Hurricanes, but he also has the luxury of playing alongside a pair of veteran stewards in Chris Lykes and Kameron McGusty. There’s a good blend of experience and youth in Coral Gables right now.

Caleb Love, North Carolina: Roy Williams brought in an elite recruiting class with several key pieces, but none is more important than the 6-3 Love. The Tar Heels averaged just under 13 turnovers as a team last season and the level of play that they get from Love at point guard could ultimately determine how they bounce back from last season’s 14-19 finish.

Day’Ron Sharpe, North Carolina: North Carolina needed reinforcements on the baseline and it brought in a big one in the 6-9 Sharpe. With he, Garrison Brooks, Armando Bacot, and fellow freshman big man Walker Kessler, expect the Tar Heels to be absolutely lethal on the back boards next season. Sharpe should help North Carolina be one of the top rebounding teams in the country in 20-21.

Bryce Thompson, Kansas: Bill Self went back to Tulsa to land this wiry scorer, who should have a major hand in the Jayhawks’ overall success. Nifty and shifty, Thompson uses angles to score and always finds ways to keep a defender on his toes.

Cam Thomas, LSU: Will Wade said in early August that Thomas will be one of the premier scorers in the country next season. If that comes to fruition then LSU is going to contend for an SEC regular season title. Look for the 6-3 Thomas to form a potent combination in the Tigers’ back court with veteran playmaker Javonte Smart.

Andre Jackson, UConn: A swiss-army knife type player who can fill the box score on a nightly basis, Jackson has the ability to tally a triple-double each time he takes the floor. An Albany native, the 6-6 Jackson is a major reason why many believe that UConn has a chance to be an immediate factor in its return to the Big East.

Moussa Cisse, Memphis: An elite shot blocker and rim runner, the 6-10 Cisse will instantly make Memphis one of the top defensive teams in the American Athletic Conference. A late addition to the Tigers’ 2020 recruiting class, Cisse’s presence should put Penny Hardaway in position to reach the NCAA Tournament for the first time as Memphis’ head coach.

Khristian Lander, Indiana: A five-star prospect, Lander’s decision to reclassify to the 2020 class will give Archie Miller the added boost he needed to have his best team yet at Indiana. Look for Lander and veteran guard Rob Phinisee to form a strong perimeter duo for the Hoosiers.

Sharife Cooper, Auburn: Bruce Pearl has repeatedly said that Cooper is the most talented point guard that he’s ever recruited and for the Tigers to reach the 2021 NCAA Tournament, he’ll have to live up that billing. Auburn lost its top six scorers from last year’s team that won 25 games, which further highlights the importance of this 6-foot floor general. As Cooper goes, so will the Tigers.