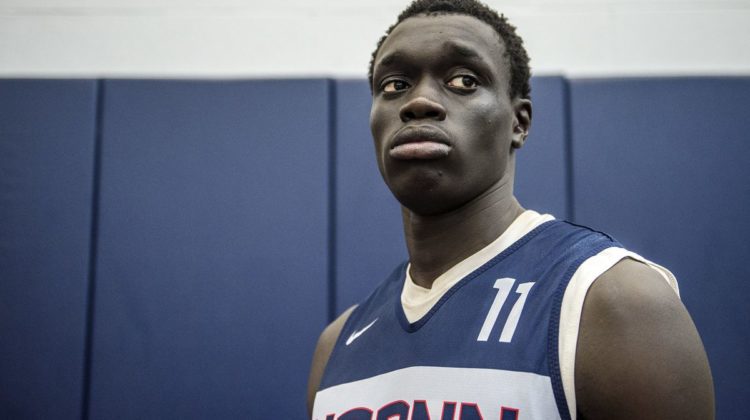 Check below for our list of 20 under-the-radar breakout players for the 21-22 college basketball season.

Akok Akok, UConn: A former top-50 recruit, Akok was never healthy last year after suffering an achilles injury in the middle of the 19-20 season. The 6-9 forward has since refined his offense and is still tenacious on defense; Akok averages 2.9 blocks in games during his career where he plays 25 minutes or more. Expect this former top-50 recruit to be a major cog in UConn’s loaded front court.

Ricky Council IV, Wichita State: Council quietly had a significant role in the Shockers’ surprising first season under Isaac Brown, which was highlighted by a trip to the NCAA Tournament. The 6-6 wing shot an impressive 44.4 percent from three-point range as a freshman and should continue to emerge as a bonafide scoring threat alongside Tyson Etienne. Council averaged 7.4 points last season.

Ethan Anderson, USC: The unsung presence in the Trojans’ program over the last few years, USC is a combined 47-17 since Anderson arrived on campus in 2019. Now 20 pounds lighter thanks to a pescatarian diet, Anderson should be lighter and quicker as he aims to challenge for all-conference honors as a junior.

Ryan Kalkbrenner, Creighton: Minutes are available in the Blue Jays’ starting five and the 7-foot Kalkbrenner is ready to capitalize. Creighton was 7-0 last season in games where Kalkbrenner scored in double figures. He’ll have to become a regular offensive focal point if Greg McDermott’s squad is going to compete for a spot in the top half of the Big East.

Michael O’Connell, Stanford: O’Connell quietly stabilized Stanford at the point guard last season in what was a season of inconsistency for the Cardinal. Hard playing and always reliable, O’Connell has the chops to develop into one of the best Glue Guys in the Pac-12 as a sophomore after averaging 6.7 points, three rebounds, and 2.8 assists as a freshman.

Tyrese Samuel, Seton Hall: After averaging 5.4 points and 3.3 rebounds last season behind Sandro Mamukelashvili as a sophomore, Samuel is ready to explode as a junior. The 6-10 big man is a multidimensional talent who can either face the basket or do damage in the paint. Samuel boasts legitimate All-Big East potential.

Samuel Mennenga, Davidson: Remember when Mitch McGary starred for Michigan? This is the Atlantic 10 version. Built like an adonis at 6-9 and 245 pounds, Mennenga combines brute strength with a tremendous feel for the game. He’ll average a double-double before his career at Davidson is over and could close to attaining that during the upcoming season.

Tristan da Silva, Colorado: Player development has been one of the key ingredients to Colorado’s program under Tad Boyle. This guy should be the latest example. The 6-8 da Silva only showed flashes of his potential last season as a freshman, but should give the Buffaloes a third quality front court piece this season alongside Jabari Walker and Evan Battey.

Keon Ellis, Alabama: Nate Oats has perimeter minutes available in his rotation following Nimari Brunett’s season-ending knee injury. Ellis will be sure to take advantage. The 6-6 wing had 10 points and nine rebounds in the Crimson Tide’s Sweet 16 loss to UCLA last spring and should emerge into a consistent offensive threat for Alabama.

Jaylin Williams, Arkansas: Eric Musselman’s confidence in Williams grew more and more as last season evolved, as evidenced by his 28-minute performance in the Razorbacks’ Round of 32 win against Texas Tech. You can’t measure everything that Williams does in a box score; his value and perception should only continue to be enhanced in 21-22.

Jared Bynum, Providence: The Friars were 10-7 in games last season where Bynum was in the lineup and 3-6 in games where he was not. His health and continued development will be a major key if Providence can return to the NCAA Tournament in 2022.

Mikey Saunders, Cincinnati: Wes Miller made it an immediate priority to retain Saunders as soon as he was named Cincinnati’s head coach. When you watch him play, you’ll know why. Armed with a high ceiling and major burst in the open floor, Saunders should be a key cog as Miller aims to rebuild the Bearcats’ program.

Ty Berry, Northwestern: How will Chris Collins replace Miller Kopp in Evanston? This guy. The 6-2 Berry is ready to make a jump and had moments of promise a year ago as a freshman. When Berry scored in double figures last season, the Wildcats were 4-0.

Derek Fountain, Mississippi State: Ben Howland may have one of the best power forward/center combos in the SEC with Garrison Brooks and Tolu Smith, but he’s going to have to find minutes for Fountain as well. The 6-9 forward has a high ceiling and is already seasoned after starting 10 games last season for the Bulldogs.

Cam Hayes, NC State: Kevin Keatts loves this 6-3 point guard, who reached double figures in four straight road games during the latter part of last season. If Hayes can emerge into one of the elite point guards in the ACC, NC State can play its way into the NCAA Tournament picture.

Devonaire Doutrive, Boise State: A born scorer, this former Arizona wing is ready to emerge as an offensive focal point for Leon Rice after Derrick Alston Jr.’s departure. Look for Doutrive to pick up where he left off after averaging 10.5 points in two games during last spring’s Postseason NIT.

Matthew Murrell, Ole Miss: Kermit Davis has the sleeper team in the SEC and that will be only enhanced with an augmented version of Murrell. A former top-50 recruit who only averaged 4.2 points last season as a freshman, Murrell should be close to a double-figure scorer — at least — during his second season of college basketball.

Caleb Lohner, BYU: Lohner was more reliable for Mark Pope as a freshman than meat and potatoes. It says here his game will reach porterhouse levels in 21-22. Don’t be shocked if this kid winds up as the top rebounder in the WCC.