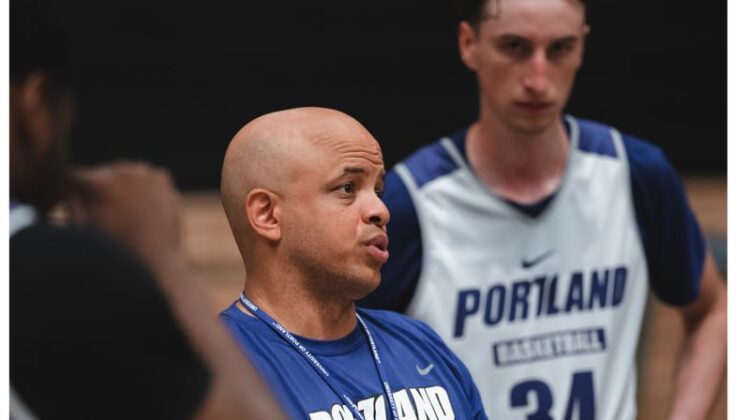 It’s never too early to start looking ahead to the upcoming year!

Check below for our list of 20 head coaches on the rise entering the 2022-23 college basketball season.

This list does not include coaches from both the Atlantic 10 and Mountain West.

Shantay Legans, Portland: The world knew that Legans could really coach after the job that he did at Eastern Washington, but he really turned heads last season when he led Portland to a 19-15 finish in his first year on the job. The Pilots were just 6-15 in the season prior to Legans’ arrival. Boisterous and confident, Legans is a proven program builder. His future could get very interesting if his team finishes in the top half of the WCC this season.

Bob Richey, Furman: Richey has built one of the most consistent mid-major programs in the country at Furman, averaging 22.2 wins in each of the past five seasons. A tremendous offensive mind, the Paladins averaged 77.6 points last season while shooting an impressive 46.4 percent from the field and 38 percent from three-point range as a team. While the sting of last season’s loss at the buzzer to Chattanooga in the finals of the SOCON Conference Tournament will never go away, Richey had his program one possession away from the NCAA Tournament. It says here Furman will be in the same situation again in 2023.

Robert Jones, Norfolk State: It’s not easy to build a program with staying power at the non-power conference level, but that’s exactly what Jones has done at Norfolk State. The Spartans have advanced to the postseason seven times during his tenure, highlighted by appearances in the last two NCAA Tournaments. Norfolk State recently signed Jones to a well deserved long-term extension through the 2028-29 season.

Richie Riley, South Alabama: The grinder’s grinder was way ahead of his peers when it came to embracing the transfer portal. Riley’s success reiterates his innovative recruiting philosophy as he’s averaged 18.8 wins in four years at South Alabama. If he ever breaks through and gets to the NCAA Tournament, Riley is tailor made to put together a roster at the highest level given the current landscape in college basketball.

Bashir Mason, St. Peter’s: It’s not easy to be the guy who follows Shaheen Holloway at St. Peter’s, but that doesn’t intimidate Mason — he was the guy that followed Dan Hurley at Wagner. The 38-year old head coach begins a new chapter of his coaching career this season in Jersey City after 10 seasons on Staten Island, where Wagner won three NEC regular season titles. The defensive minded Mason — who was a former guard at Drexel — is built to outwork the opposition.

Austin Claunch, Nicholls: 32 years young, Claunch has many years ahead of him in the coaching profession, but his first few have been mightily productive. Nicholls has won 60 games over the past three seasons under Claunch, highlighted by last season’s appearance in the Postseason NIT.

Joe Pasternack, UC Santa Barbara: Pasternack is a whopping 61 games over .500 in his five years with the Gauchos as UC Santa Barbara has averaged 21 wins per season during his tenure. An elite recruiter, Pasternack has made his program a regular landing spot for power conference transfers such as Andre Kelly (Cal), Miles Norris (Oregon), and former Oregon State guard JaQuori McLaughlin, who led the Gauchos to the 2021 NCAA Tournament.

Matt Langel, Colgate: Simply put, Langel has ripped through the Patriot League like a chainsaw through butter. Colgate has won at least a share of four straight conference titles under his watch and played in each of the last three NCAA Tournaments. Because of Langel, this is now the Patriot League’s flagship program. Who needs Adonal Foyle?

Eric Henderson, South Dakota State: Henderson’s three-year run in the Summit League is a joke. This guy is a combined 68-22 over the past three seasons, with a ridiculous 40-6 mark in conference play. Don’t be shocked if he leads the Jackrabbits back to the NCAA Tournament in 2023 after losing Baylor Scheierman (16.2 points, 7.8 rebounds, 4.5 assists) to Creighton — he’s that good.

Stan Johnson, Loyola Marymount: Can Johnson be this season’s Todd Golden? Don’t rule it out of the realm of possibility. Like Golden, Johnson had a terrific first year (13-9) as a head coach in the WCC, but then took a step back in his second (11-18). If the Lions can make a push towards the top of the WCC in 2022-23, Johnson could be in position to benefit. This guy has the presence, temperament, and recruiting acumen to coach at the highest level. Remember: Johnson was the point man on Markus Howard when he was an assistant at Marquette.

Jared Grasso, Bryant: Grasso has single handedly transformed Bryant into one of the most exciting mid-major programs in the country just years after the Bulldogs won three games in the season prior to his arrival. Bryant was fourth nationally a year ago in adjusted tempo according to KenPom.com and reached the NCAA Tournament for the first time in school history. Now a member of the America East after several seasons in the NEC, the Bulldogs are again in position to again be a national story thanks to an elite transfer class, headlined by former Top-50 recruit Earl Timberlake.

Terrence Johnson, Texas State: Johnson has done everything in his first two years as a head coach except make the NCAA Tournament. A two-time Sun Belt Coach of the Year, Johnson has led Texas State to an impressive 39-15 record in two seasons along with a sensational 24-6 mark in Sun Belt play. If the Bobcats can take another step in 2023 following last season’s appearance in the Postseason NIT, more opportunities will be headed in Johnson’s direction.

Grant McCasland, North Texas: All this guy does is win. The 45-year old McCasland has never had a losing season in his eight years as a head coach and has led three different schools — Midwestern State (Division II), Arkansas State, and North Texas — to 20-win seasons. A defensive guru, McCasland led a defense at North Texas last season that was ranked 22nd by KenPom.com in defensive efficiency.

Darian DeVries, Drake: DeVries has averaged 23.8 wins in four years at Drake, which was highlighted by a victory over Wichita State in the 2021 NCAA Tournament. With several key players returning from last season’s team that lost to Loyola Chicago in the finals of the Missouri Valley Conference Tournament, DeVries is in prime position to again lead one of the top mid-major teams in the sport.

Jordan Mincy, Jacksonville: All Mincy did in his first season as a head coach was lead Jacksonville to 21 wins and a second-place finish in the Atlantic Sun. Armed with deep roots in the southeast, Mincy was a top assistant at Florida under Mike White prior to taking his current post. If Jacksonville plays in the 2023 NCAA Tournament, Mincy will have no shortage of suitors.

Dana Ford, Missouri State: Just 38 years young, Ford is already entering his ninth season as a Division 1 head coach. He’s quietly posted a 40-18 record over the past two seasons with an impressive 25-11 mark in Missouri Valley Conference play. If Ford ever broke through and reached the NCAA Tournament, he’d quickly be on the short list for openings at the power conference level.

Jeff Boals, Ohio: Boals led the Bobcats to an NCAA Tournament win over Virginia two years ago and then lost Jason Preston to the NBA. He responded with a 25-win season. While Boals lost his two best players — Mark Sears (Alabama) and Ben Vander Plas (Virginia) — to the transfer portal following last year, he’s too good of a coach to not keep Ohio right in the thick of things in the MAC.

Jonas Hayes, Georgia State: Hayes hasn’t coached a game yet at Georgia State, but showed major promise last spring when he led Xavier to a Postseason NIT title as the team’s interim head coach. A former player at Georgia, Hayes is likeable, genuine, and extremely capable as both a coach and recruiter. This a potential star to monitor in the college coaching industry.

Danny Sprinkle, Montana State: The reigning Big Sky Coach of the Year had a massive season a year ago, leading the Bobcats to 27 wins and an NCAA Tournament appearance. If Sprinkle can replicate similar success in 2022-23, he’ll be a name associated with any vacancy that has substance next spring on the West Coast.

Ritchie McKay, Liberty: It’s been nearly 20 years since McKay has been a head coach in a power conference, but that doesn’t mean that it will never happen again. McKay had serious interest from one high major program a few years ago, but ultimately opted to stay at Liberty, where he’s led the Flames to five straight 20-win seasons and at least a share of four straight Atlantic Sun regular season titles. With All-American guard Darius McGhee back for another season, expect both McKay and Liberty to stay firmly entrenched in the national spotlight.