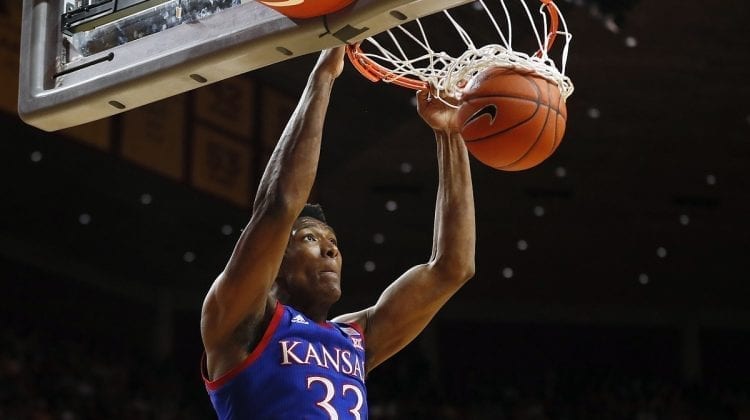 Check below for our list of 20 breakout players for the 20-21 college basketball season. Please note that someone can not be considered a “breakout player” if he was a double-figure scorer the previous year.

David McCormack, Kansas: After playing behind Udoka Azubuike for the past two years, McCormack is ready to explode as a junior. The 6-10 center averaged 6.9 points and 4.1 rebounds last season in just 14.7 minutes. Don’t be shocked if those numbers double next season.

E.J. Liddell, Ohio State: Chris Holtmann wasn’t excited about losing Kaleb Wesson a year early, but he feels better about Ohio State’s front court knowing that Liddell is ready to step in as a starter. The versatile forward averaged 14.5 points and 7.5 rebounds during the Buckeyes’ final two games of last season and should hit the ground running in 20-21.

Matthew Hurt, Duke: Mike Krzyzewski has always loved having a skilled power forward who could extend the defense and that’s just what Hurt provides. After making 42 three-points shots and shooting 39.3 percent from long distance a year ago, this Minnesota native should be able to augment those numbers next season as a sophomore.

Keion Brooks, Kentucky: John Calipari returns ONE player from last season’s team that won the SEC regular season title and that player is Brooks. The 6-7 sophomore needs to give Kentucky both consistency and leadership as he aims to cement his place as the Wildcats’ primary power forward. Expect his freshman averages of 4.5 points and 3.2 rebounds to spike significantly.

Drew Timme, Gonzaga: Can a team lose both Killian Tillie and Filip Petrusev up front and still have a chance to win a national title? Only if you have players ready to step in like Timme. Expect this 6-10 big man to emerge as one of the top front court players in the sport in 20-21.

David Johnson, Louisville: Johnson is like a volcano — he can erupt at any time. It says here that he will next season. The 6-5 guard battled shoulder injuries as a freshman, but still averaged 9.7 points, 4.5 rebounds, and 5.1 assists in games where he logged 20 minutes or more. Johnson has the potential to emerge as one of the best perimeter players in the sport as a sophomore.

Samuell Williamson, Louisville: Don’t be surprised if Williamson goes from reserve to one of the best players in the ACC. The Cardinals had a veteran team last season, with Jordan Nwora and Dwayne Sutton cemented in their starting roles as veteran forwards. With both of them now gone, everything is aligned for the 6-7 Williamson to make the KFC Yum Center his own personal sanctuary.

Kai Jones, Texas: A freak athlete with freakish length, the 6-11 Jones showed flashes of stardom as a freshman blended with doses of inconsistency. That should change now that he’s a sophomore. With Jones and incoming freshman Greg Brown next to each other in Texas’ front court, the Longhorns will boast one of college basketball’s more physically imposing baseline tandems.

Devan Cambridge, Auburn: Bruce Pearl may need diapers to deal with all of the unproven commodities that he’s going to have next season, but Cambridge is a building block. The 6-6 forward has the type of length and athleticism that Pearl usually craves and scored in double-figures three times last year in SEC play. He’ll be a starter for Auburn moving forward.

Matthew Mayer, Baylor: The Bears have plenty of talented guards on their roster, but Mayer may have the highest long-term ceiling. A 6-9 guard with quality skills, Mayer could flourish if Scott Drew chooses to lean extensively on a small ball lineup next year featuring four perimeter players.

N’Faly Dante, Oregon: A larger than life figure, the 6-11 Dante never got into a rhythm last season after missing the first semester due to eligibility issues. Now fully healthy and more seasoned, expect Dante to perform like he did on the AAU circuit, where he led Mokan Elite to a championship at the prestigious Peach Jam while earning MVP honors.

Jalen Graham, Arizona State: The Sun Devils have become “Guard U” under Bobby Hurley, but someone’s going to have to rebound. That should be Graham. The 6-9 center has a massive opportunity to fill a void in the pivot and on the back boards following Romello White’s decision to transfer to Ole Miss. Hurley needs mileage out of Graham if the Sun Devils are going to win a Pac-12 regular season title in 20-21.

Nathan Mensah, San Diego State: The 6-10 Mensah was a forgotten member of last year’s magical season for the Aztecs because he only played in 13 games due to a respiratory issue. He won’t be forgotten next year. Mensah has all-conference caliber ability as evidenced by his averages of 6.9 points, 6.8 rebounds, and 1.7 blocks prior to illness. He’ll be a critical piece to San Diego State’s NCAA Tournament hopes in 2021.

Miles McBride, West Virginia: Bob Huggins needs a consistent perimeter scoring threat to complement Derek Culver and Oscar Tshiebwe on the interior; that will be McBride. Everyone in the Big 12 knew about this kid last season, but next year he’ll be known by everyone in the country. Remember the name.

Rocket Watts, Michigan State: Watts averaged 17.8 points during Michigan State’s final four games of last season before things were shut down due to COVID-19. If he can keep his offense elite while also creating for his teammates, this 6-2 sophomore has the requisites to be one of the best players in the Big Ten.

Jerome Hunter, Indiana: Archie Miller needs mileage out of Hunter if Indiana is going to finish in the top half of the Big Ten. With Justin Smith’s unexpected decision to transfer opening up minutes on the wing, this is the guy who may be in position to benefit. If healthy, Hunter’s talent is undeniable.

KyKy Tandy, Xavier: Tandy and scoring go together as seamlessly as Cincinnati natives and Graeter’s Ice Cream. The 6-2 guard averaged 9.3 points last season as a freshman in games where he logged 20 minutes or more. Expect this kid to be one of the top scorers in the Big East as a sophomore.

Marcus Sasser, Houston: There aren’t many first-year guards in college basketball who could have done what this kid did last season. The 6-1 Sasser averaged 8.1 points and started 17 games for a Top 25 team, but more impressively only committed 29 total turnovers in 711 total minutes. Sasser is on the verge of becoming a star in the American Athletic Conference.

Jared Rhoden, Seton Hall: Kevin Willard loves this versatile forward, who has been an unsung presence in South Orange over the past two seasons. It won’t stay that way for long. Don’t be surprised if Rhoden leads the Pirates in scoring in 20-21 — he’s that talented.. Seton Hall is 12-3 over the past two years in games where Rhoden scores in double-figures.

Boogie Ellis, Memphis: Ellis came to Beale Street with massive pedigree after originally committing to Duke while he was in high school. It says here that Ellis could double his freshman average of 8 points as a sophomore as he aims to improve his consistency during his second season of college basketball.