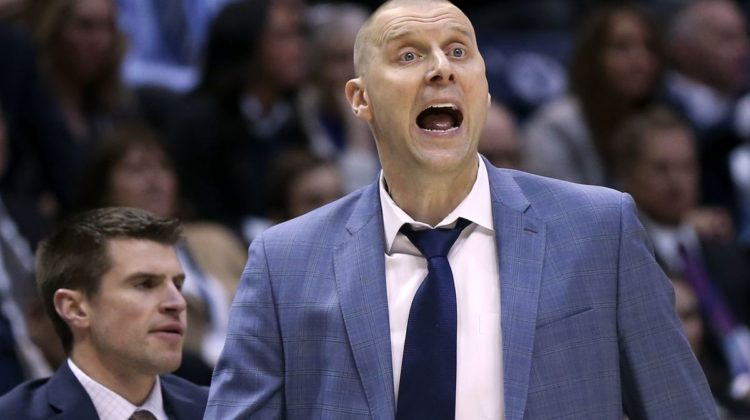 It’s never too early to start looking ahead to the upcoming season!

Check below for our list of 16 head coaches on the rise entering the 21-22 college basketball season.

Mark Pope, BYU: Pope is a combined 44-15 in two seasons at BYU and led the Cougars to a six seed in last March’s NCAA Tournament. A key member of the 1996 Kentucky team that won a national title, Pope figures to be on the short list in Lexington whenever John Calipari decides to conclude his coaching career.

Richie Riley, South Alabama: The grinder’s grinder attracted interest from higher level programs last spring, but opted to remain in Mobile. Riley is a combined 89-67 in five seasons as a head coach and knows the transfer landscape as well as anyone in the sport. If he leads South Alabama to a deep March run this season, he’ll again have a decision to make in 2022.

Darian DeVries, Drake: A slew of injuries to key players couldn’t derail DeVries and Drake last season, as the Bulldogs finished 26-5 and won a game in the NCAA Tournament. With the majority of his team back, expectations will again be high in 21-22. DeVries has won 70 games in three years as a college head coach.

Stan Johnson, Loyola Marymount: Johnson answered the bell in his first season with the Lions, leading Loyola Marymount to a 13-9 overall record and third-place finish in the WCC. A high-level recruiter and communicator, Johnson possesses the demeanor, poise, and vision to one day be a power conference head coach.

Dennis Gates, Cleveland State: Cleveland State was in purgatory a few years ago. Last March, it was in the NCAA Tournament. That’s because of Gates. Much like his mentor Leonard Hamilton, Gates has an unbelievable ability to bring people together in an effort to sacrifice for the greater good of the group. He’ll lead a team in 21-22 that will be projected to win the Horizon League.

Jared Grasso, Bryant: The Bulldogs won three games in the season prior to Grasso’s arrival and were a few possessions away from the NCAA Tournament last March. They’ve also won a pair of guarantee games in the past two seasons against two Atlantic 10 programs — UMass and Fordham. None of this happened by accident. Grasso proved himself as a recruiter while he was Tim Cluess’ top assistant at Iona and now at Bryant, he’s regularly proving himself as a coach.

Joe Pasternack, UC Santa Barbara: Pasternack has led the Gauchos to four straight 20-win seasons for the first time in program history and was a layup away from upsetting Creighton last March in the first round of NCAA Tournament. There’s not many programs that will want to play UC Santa Barbara as long as this guy is the head coach.

Shantay Legans, Portland: Eastern Washington battled Kansas for 40 minutes last March in the NCAA Tournament and that’s a credit to Legans. The boisterous head coach was a combined 75-49 in four years with the Eagles, which was highlighted by an impressive 53-20 mark in conference play. He’s got his work cut out moving forward at Portland, but this guy showed last March that he isn’t afraid to trade jabs with the big boys.

Shaheen Holloway, St. Peter’s: Kudos to Holloway, who has led St. Peter’s to back-to-back top-three finishes in the MAAC regular season standings. That’s a major accomplishment that should be celebrated in Jersey City considering the lack of resources in the Peacocks’ program. As long as this former Seton Hall floor general is at St. Peter’s, the Peacocks will be a perennial contender in the MAAC.

Dana Ford, Missouri State: Despite being just 37 years old, Ford is already at his second head coaching job. It won’t be his last. After rebuilding Tennessee State, he’s now achieving relevance at his current post. Expect Missouri State to be at the top of the MVC league standings this season along with Loyola Chicago, Drake, and Northern Iowa.

Casey Alexander, Belmont: Alexander is a combined 52-11 since arriving at Belmont, with a ridiculous 33-5 mark in OVC play. With his entire roster back from a team that finished 26-4 last season, he’s in prime position to continue to lead the Bruins to new heights in Nashville.

Paul Mills, Oral Roberts: A disciple of Scott Drew, Mills broke out as a coach last March when he led Oral Roberts to the Sweet 16. With Max Abmas — the nation’s top overall scorer — back for another season, expectations will again be high for Mills and the Golden Eagles, who will be pegged as one of the top mid-majors in the sport in 21-22.

Grant McCasland, North Texas: Like Mills, McCasland worked as an assistant at Baylor prior to becoming a head coach. He’s since led two programs — Arkansas State and North Texas — to 20-win seasons and led the Mean Green to an upset victory over Purdue last March in the NCAA Tournament.

Robert Jones, Norfolk State: Jones has paid his dues in this profession, serving as a high school coach at St. Mary’s (Manhasset) before landing a Division 1 gig. He’s led Norfolk State to six postseason appearances in eight years as a head coach, including an NCAA Tournament berth in 2021.

Matt Langel, Colgate: It’s not easy to sustain success at a mid-major program in Upstate New York, but Langel has made it look easy. He’s won at least a share of the past three Patriot League regular season titles at Colgate and is a combined 67-22 during that span.

Terrence Johnson, Texas State: All Johnson did in his first year as a head coach was lead a team to an 18-7 finish while winning the Sun Belt regular season title. He was also named Sun Belt Coach of the Year. That’s especially impressive considering he was operating on an interim basis during a once-in-a-century global pandemic. A word to the wise: Keep an eye on this guy.