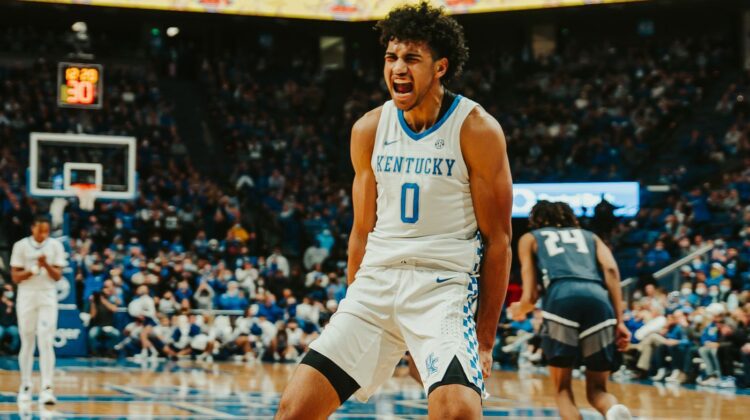 Check below for our list of 15 players who will become stars during the 2022-23 college basketball season.

Jacob Toppin, Kentucky: A mismatch nightmare at power forward, Toppin shined during Kentucky’s foreign tour to the Bahamas over the summer as he averaged 16.8 points in four games. With the majority of opposing defenses set to key on Oscar Tshiebwe — the reigning AP National Player of the Year — during the upcoming season, look for this guy to take full advantage. The 6-9 Toppin should be an All-SEC caliber player in 2022-23.

Colby Jones, Xavier: Jones shined during last season’s Postseason NIT, averaging 14.8 points, six rebounds, 4.4 assists, and two steals during a five-game stretch all while shooting 56 percent from the field and 40 percent from three-point range. The 6-6 junior is skilled, versatile, and can play different positions. He’ll go from being a really good piece as a sophomore to one of the best players in the Big East as a junior.

DaRon Holmes II, Dayton: He’s not Obi Toppin, but the 6-10 Holmes is one of the primary reasons why the Flyers are projected to be one of the top non power conference teams in college basketball during the upcoming season. A former Top-50 recruit, Holmes averaged 20 points and six rebounds over his final five games as a freshman while shooting an astronomical 68.3 percent from the field. Don’t be shocked if he’s the Atlantic 10 Player of the Year as a sophomore.

Julian Strawther, Gonzaga: Strawther heavily flirted with leaving for the NBA after his sophomore season, but opted to return to Spokane where he’ll be part of a returning nucleus that will again be in position to give Gonzaga its first national title. The 6-7 wing averaged 11.8 points and 5.4 rebounds a year ago in his second season of college basketball after tallying 3.4 points and 1.2 rebounds in his first. As a junior, he’ll be the Bulldogs’ secondary scoring threat behind Drew Timme. Buy stock now.

Ryan Nembhard, Creighton: The reigning Big East Rookie of the Year doesn’t get the attention that he deserves entering his sophomore season because he didn’t play after Feb. 23rd due to a season-ending wrist injury. Have people forgotten how good Nembhard was as a freshman point guard? The 6-foot floor general averaged 11.3 points, 4.4 assists, and 3.1 rebounds in his first year of college basketball while logging an average of 34.8 minutes each time he took the floor. Nembhard is on track to be one of the best point guards in the country and possibly, an All-American during the 2022-23 season.

Arthur Kaluma, Creighton: The 6-7 Kaluma averaged 18 points and nine rebounds in two NCAA Tournament games last March, highlighted by an 24-point, 12-rebound performance against Kansas in the Round of 32. Expect Kaluma to emerge as one of the best players in the Big East during his second season of college basketball.

Adam Flagler, Baylor: A year ago, Flagler was pegged as the next great guard in Baylor’s program after he averaged 10.7 points during the 2021 NCAA Tournament. Unfortunately, a slew of nagging injuries inhibited his growth. If Flagler is fully healthy in 2022-23, he’s a prime candidate to be the Big 12 Player of the Year and an All-American.

Zach Edey, Purdue: With Trevion Williams no longer in Purdue’s program, there will no longer be any debates regarding who the Boilers’ focal point should be offensively in the halfcourt. The 7-4 Edey averaged 14.4 points and 7.7 rebounds in just 19 minutes last season while shooting just under 65 percent from the field. If Edey can play 5-8 more minutes as a game this season as a junior, averaging 20 points and 10 rebounds is well within his reach.

Matthew Cleveland, Florida State: A slew of injuries made last season a lost one for Florida State, but Cleveland’s level of play as a freshman was a shining light. The 6-7 forward reached in double figures in his final nine games and averaged an impressive 11.5 points and 4.6 rebounds overall. He’ll be one of the best players in the ACC as a sophomore.

Graham Ike, Wyoming: If Ike played at Syracuse, he’d regularly be compared to Rick Jackson. Instead, he’s doing yeoman’s work in Laramie for Wyoming, who should be one of the best non power conference teams in college basketball this season. The 6-9 Ike averaged 19.5 points and 9.5 rebounds a year ago for the Cowboys and had eight games where he tallied at least 25 points and 10 rebounds. What can he do for an encore? Put up the same numbers on a team that’s regularly ranked in the AP Top 25 en route to a quality seed in the 2023 NCAA Tournament.

Yuri Collins, Saint Louis: The nation’s leader in assists a year ago (7.9) flirted with the transfer portal, but ultimately opted to return to the Billikens. He’ll reap the benefits of the return of Javonte Perkins, who was the Atlantic 10 Preseason Player of the Year last season prior to an ACL injury. If Saint Louis has the season that many expect, Collins will be regularly discussed as one of the best point guards in the sport.

Cliff Omoruyi, Rutgers: How will Steve Pikiell replace Geo Baker and Ron Harper Jr. in end of game situations? Omoruyi is a good bet. The 6-11 center quietly had a very good sophomore season (11.9 points, 7.8 rebounds, 1.3 blocks) as Rutgers advanced to its second straight NCAA Tournament. Expect him to make another jump as a junior. Omoruyi is set to become the face of the Scarlet Knights’ program and should be in line to be an All-Big Ten first-team caliber player in 2022-23.

Tramon Mark, Houston: A shoulder injury only allowed Mark to play seven games last season, but he’s now fully cleared and ready to again emerge on the national scene. Prior to injury, the 6-5 lefty and former Top-100 recruit was averaging 11.8 points during the early portion of last year. Mark will be a key component to Houston, who has all the ingredients to advance to its second Final Four in the last three seasons.

Coleman Hawkins, Illinois: It’s time. Illinois does not return a double figure scorer from last season, but it does return the 6-10 Hawkins, who averaged 5.9 points and 4.3 rebounds as an ancillary piece next to Kofi Cockburn. With Cockburn no longer in Champaign, Hawkins is tailor made to excel as a stretch five-man in Brad Underwood’s “positionless” offense in 2022-23.

Kris Murray, Iowa: After this season, nobody is going to call this guy “Keegan’s brother”. The 6-8 Murray is in line to become the next great player in Iowa’s program and he’s already provided a quality sample size. In games last season where Murray logged 25 minutes or more, he averaged 15.8 points and 6.6 rebounds. That’s a pretty good estimate of what people should expect out of this guy moving forward in the Big Ten.