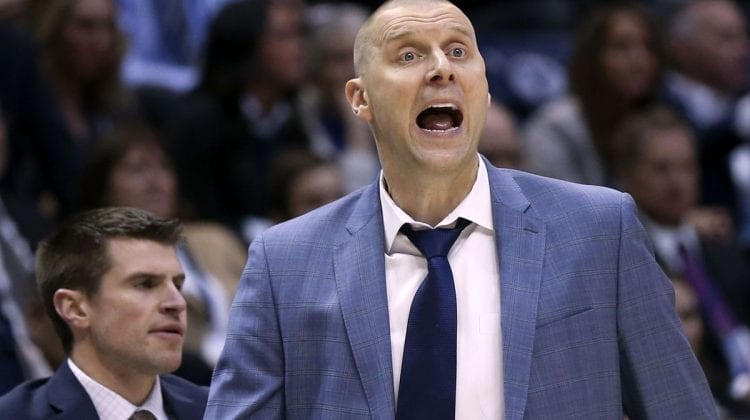 Check below for our list of 12 head coaches on the rise entering the 20-21 college basketball season.

Mark Pope, BYU: Pope proved that he could coach while he was at Utah Valley. At BYU, he’s proving that he’s a potential star. The Cougars went 24-8 last season in Pope’s first year in Provo and would have been a dark horse candidate to reach the Final Four last March had the NCAA Tournament not been cancelled due to COVID-19. As long as Pope is BYU’s head coach, the Cougars will be expected to be a perennial contender for the field of 68.

Richie Riley, South Alabama: A grinder’s grinder, Riley has already won at least 20 games at two different programs despite being just 37 years old. An elite recruiter in the transfer market, Riley possesses the savvy and personality to be a high-major head coach. He’ll get inquiries if he can get South Alabama into the NCAA Tournament.

David Cox, Rhode Island: It wasn’t an easy task to be the guy who followed Dan Hurley at Rhode Island, but Cox has done an admirable job. The Rams have won a combined 39 games in the past two seasons under Cox, whose calm demeanor and temperament constantly reiterate that he has the tools to be a successful head coach at the power conference level.

Andy Toole, Robert Morris: No head coach was as consistent as Toole over the last decade in the Northeast Conference and that ability will now carry over to the Horizon League. Despite losing several players who transferred to power conferences, Toole has still amassed seven seasons with at least 18 wins. If everyone had equal talent, this guy would be viewed as one of the top performers in the sport.

Craig Smith, Utah State: One thing I never thought I’d write a few years ago? Logan, Utah is a basketball hotbed. Back-to-back Mountain West Conference Tournament titles have quickly changed Utah State’s national perception and that’s because of Smith. The Aggies are 54-15 during his tenure and have scored more points than any other two-year period in the history of Utah State’s program.

Matt Figger, Austin Peay: Prior to Figger’s arrival, Austin Peay’s last 20-win season was in 2007. That’s now become the expectation for the Governors. Austin Peay has averaged 20.6 wins in its first three years under Figger following back-to-back seasons with a combined 43 victories. A disciple of Frank Martin, Figger’s star is set to rise nationally as he gets set to lead one of the top mid-major teams in the country this season.

James Jones, Yale: It’s not an oversight, it’s an insult. Jones has won the Ivy League in four of the last six years, but has rarely been mentioned for power conference openings. A wise athletic director may soon change that, especially if he’s reminded of the fact that Jones led Yale to a win over Baylor in the 2016 NCAA Tournament.

Bob Richey, Furman: People from the periphery know Richey best from Furman’s win at Villanova a few years ago, but he’s got much on his resume than just that. Furman is a combined 73-26 under Richey’s watch, with an impressive 41-13 mark in SOCON play. He’s an NCAA Tournament appearance away from potentially having a lucrative offer to jump to a higher level.

Damon Stoudamire, Pacific: The reigning WCC Coach of the Year has grinded his way to respectability as a head coach, winning 23 games last season at one of the hardest jobs in the conference. A former NBA point guard, Stoudamire is a natural leader and has high-major recruiting experience from his days as an assistant at both Arizona and Memphis. If he can keep Pacific at the top of the WCC, people will take notice.

Brian Wardle, Bradley: Back-to-back Missouri Valley Conference Tournament titles have made Wardle an instant March success story. A former player and assistant coach under Tom Crean at Marquette, Wardle’s deep ties in the Midwest figure to make him a potential candidate for future job openings after successful head coaching stints at both Bradley and Green Bay.

Todd Golden, San Francisco: The Dons’ baby faced head coach is only 35, but looks like he’s 25 and coaches like he’s 45. Just ask Mark Few. San Francisco went toe to toe with Gonzaga in the semifinals of the WCC Tournament last March before falling by only four points. 22 wins in Golden’s first season leading a Division 1 program have laid a strong foundation to what should be a prosperous career.

Jeremy Ballard, Florida International: Ballard was invaluable as an assistant to Shaka Smart when Smart was at VCU and now has proven his worth as a head coach. The 39-year old Ballard has won a combined 39 games during his first two seasons at Florida International, a program that won just 34 total games in the three years prior to his arrival.