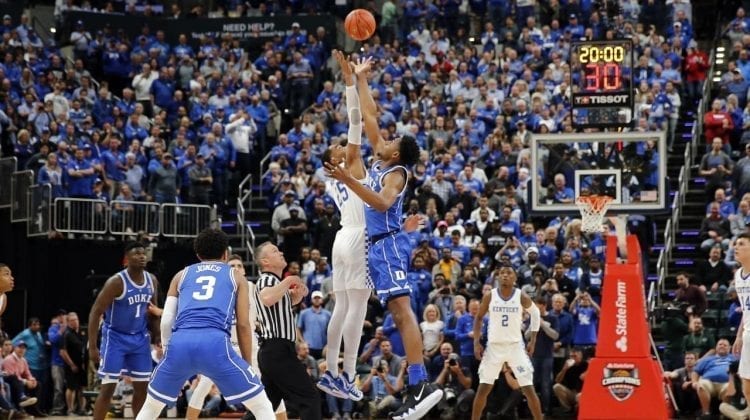 We are just two days away from college basketball’s return!

1. Multiple teams will play in the 2021 NCAA Tournament after playing less than 15 total games

There’s going to be setbacks. There’s going to pauses. And there’s going to be teams on Selection Sunday who qualify for the 2021 NCAA Tournament after barely playing more than the NCAA’s requirement of 13 games to be eligible for the field of 68. Many college basketball programs believe that the X-Factor for the upcoming season is whether or not the CDC’s mandatory quarantine period after a positive COVID-19 test will be lessened from 14 days. This would obviously change the amount of games that teams can get played between now and Selection Sunday.

2. At least one power conference will play league games in a “bubble type” setting

This feels inevitable. The NCAA created a “Golden Window” for college basketball to be played by starting the season on Nov. 25th and beginning at a time where the majority of other students are off campus. Still, with COVID-19 numbers spiking everywhere, many league executives feel that their best chance to get conference games played exists when multiple teams are at a single location. This feels like an inevitability.

3. Adam Flagler will be a national name by the end of the week

The 6-3 Flagler officially takes centerstage this week as the Baylor opens play in the Empire Classic at Mohegan Sun on Wednesday (Baylor coach Scott Drew announced on Sunday that he tested positive for COVID-19, but still expects the team to play in the event). Several well embedded moles in Waco believe that Flagler — who averaged 15.9 points two years ago at Presbyterian before redshirting last season — will be just as capable in the Bears’ backcourt as Jared Butler, MaCio Teague, and Davion Mitchell. He’ll get three high profile opportunities this week to make an immediate statement, as the Bears are expected to play two games in Connecticut before traveling to Seton Hall on Sunday as part of the Big East-Big 12 Battle.

John Calipari has assembled a murderers’ row type of early schedule for a team that returns one player — Keion Brooks — from last season. The Wildcats will host Atlantic 10 favorite Richmond on Sunday and will then face Kansas on Dec. 1st in the Champions Classic in Indianapolis. A few days later, Kentucky heads to Atlanta to play an underrated Georgia Tech team that returns four starters. The Wildcats then returns home to play Notre Dame, followed by a matchup in Cleveland against UCLA in the CBS Sports Classic on Dec. 19th. Seven days later, the Wildcats will play Louisville at the KFC Yum Center. That’s six difficult games in a row for a team that only has one player on its roster who was in Kentucky’s program last season.

5. Gonzaga will miss Filip Petrusev more than most expect

Losing a first-team All-American in the low post is never easy, even if you have a player like Drew Timme ready to inherit the minutes that were left behind. Gonzaga is still well positioned to be one of the best teams in college basketball this season, but losing Petrusev in the pivot isn’t something that can be just glossed over. It will be interesting to see how quickly the other big men in Mark Few’s program can emerge to provide depth behind Timme in the pivot.

6. Michigan State’s point guard situation will be a work in progress

Life without Cassius Winston could be tough sledding early for the Spartans, who according to many highly placed spies in East Lansing are still trying to find the right formula at the most important position on the floor. Sophomore Rocket Watts is likely best served in an off-the-ball capacity on offense, which means that Tom Izzo may hand the ball to junior Foster Loyer or 6-3 freshman A.J. Hoggard. This is a big storyline to monitor nationally.

7. At least one Big Ten who finishes outside the league’s top four will make the Sweet 16

Remember what happened in 2013? That’s when Michigan was the five seed in the Big Ten Tournament and wound up advancing all the way to the national title game, where it eventually lost to Louisville. The same type of thing could happen this season. The Big Ten currently has nine of its teams ranked in the ROTHSTEIN 45, with three of them — Iowa, Wisconsin, and Illinois — ranked in the Top 10. There’s going to be a lot of capable teams in this league who don’t finish in the top half of the conference.

8. James Bouknight will lead UConn to a top-three finish in the Big East

This 6-4 sophomore will be the Huskies’ focal point as they rejoin the league that made them famous after spending the past few seasons in the American Athletic Conference. It says here that UConn’s first year back in the Big East will be a productive one. In addition to Bouknight, Dan Hurley’s squad also boasts a pass-first point guard in Howard transfer R.J. Cole, a top-50 freshman in Andre Jackson, and one of the deepest front courts in all of college basketball. UConn will quickly cement its position in the Big East’s top tier.

Can this league tie its 2016 record of seven teams in the field of 68? That remains to be seen, but the Pac-12 should have at least five of its programs hear their names called on Selection Sunday. Four Pac-12 teams — UCLA, Arizona State, Oregon, and Stanford — are currently ranked in the Top 27 of the ROTHSTEIN 45. Colorado, Arizona, USC, Utah, and Washington also figure to contend for a postseason berth in 2021.

Richmond was voted first in the Atlantic 10’s preseason poll a few weeks ago, but it would be foolish to ignore what the Billikens return and what they’ve already proven. Travis Ford bring back everyone of significance from last season’s team that won 23 games, headlined by three all-conference players in Jordan Goodwin, Hasahn French, and Javonte Perkins. Saint Louis also won at Richmond last season and played the majority of last year without two starting caliber wings — Gibson Jimerson and Fred Thatch — who only played in a total of 16 games due to injuries. This team is loaded and has a legitimate chance to be the best non power conference team in college basketball.